C-10 gets underway in Trioli

C-10 gets underway in Trioli

A meeting by the Committee of Ten (C-10) nations chosen by the African Union (AU) to pursue ways of getting Africa into the ‘permanence’ of the UN Security Council is currently underway in the Libyan Capital of Tripoli.

Chaired by President Ernest Bai Koroma, the committee is deliberating on matters pertaining to pending reports (interim and supplementary) submitted by C 10 Permanent Representatives in New York on the Question of the Equitable Representation on and Increase in the Membership of the Security Council and other related matters. The leaders would also be briefed on the Committee of Ten Foreign Ministers meeting held in Kampala on the 20th of October 2009 during the AU Special Summit on Refugees, Returnees, Returnees and Displaced Persons in Africa.

President Koroma arrived in Tripoli last evening and was received at the airport by a delegation of the Libyan government and officials of the Sierra Leone embassy to Libya, led by Ambassador Dr. Mohamed Samura.

This morning, the President met with Libyan Leader Muammar Ghaddaffi and had preliminary discussions before the meeting proper.

The closed-door meeting will go late into the evening before the President and party leave for Sierra Leone later today. 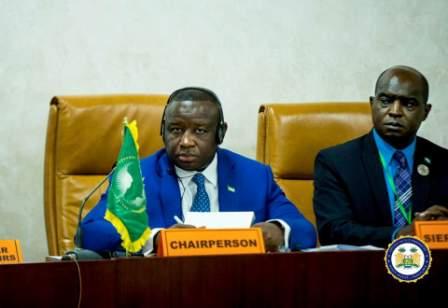