Homepages
Your trusted place for Sierra Leone and global news
Trending News
HomeHealthKailahun, Kono and Magburaka to get ultra-modern Pediatric and Maternity Centres

Kailahun, Kono and Magburaka to get ultra-modern Pediatric and Maternity Centres 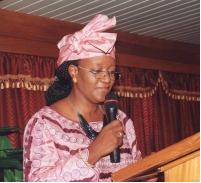 Kailahun, Kono and Magburaka to get ultra-modern Pediatric and Maternity Centres

Magburaka, May 31 (SLENA) – Health and Sanitation Minister, Haja Zainab Hawa Bangura (in photo) and Team of professionals from UNICEF and her Ministry have concluded an inspection site visit to Magburaka, Kailahun and Kono for the construction of ultra-modern Pediatric and Maternity Medical centres.

Welcoming the team in Magburaka, Paramount Chief Alhaji Masakama Kanamanka III commended the Minister and government for the timely intervention in giving the hospital a face lift though the rehabilitation is at a slow pace.

He lauded the Minister for effectively monitoring progress on the rehabilitation and the construction of the Maternity Complex as well as her strides in ensuring that they have an ultra-modern pediatric medical centre funded already by UNICEF.

The Paramount Chief expressed gratitude to President Koroma for the current roads network in the Magburaka Township, describing the move as an invaluable infrastructural gesture towards economic growth and development.

Health and Sanitation Minister, Zainab Hawa Bangura thanked the ADB and UNICEF for complementing government’s infrastructural and human resource development strides in the country, expressing her determination to handover the hospital between June and July, 2012.

She reminded her audience about her visit to Magburaka describing the hospital at that time as an eye-sore, and the worst among the district hospitals in the country. A status the Minister said ignited her to negotiate with government and partners for its urgent rehabilitation.

Mrs. Bangura said Tonkolili is very strategic and bordered by seven districts, adding that the maternity when completed will be equipped with a theatre, a laboratory, a labour ward, a dispensary and a recovery room that would effectively handle referrals and provide quality services. “Equipment and brand new vehicle and an ambulance have been procure”, the Minister told her audience.

In a related development, the Minister and team visited the sites in Kono and Kailahun where the government was hailed for giving priority to the people’s health.

In Kailahun, Paramount Chief Mohamed Banya of Luawa Chiefdom and Land Owners representatives, Chief Bockarie Kondorvor took the Minister and team to over 10 acres of land site for the construction of a pediatric and maternity complex.

In Kono, the Minister and team visited the proposed site for the construction of the pediatric centre, and the rehabilitation work where she expressed dissatisfaction over the poor performance of the Breast Through Construction Company. A conducted tour of various facilities in the hospitals in Kono and Magburaka Hospitals formed part of the visit.

“Africa will be the Powerhouse of...