In their determination to reach a tangible objective, the All People’s Congress of North American (APC/NA) branch in collaboration with the Texas Houston Chapter, has on Saturday May 26, concluded an incredible fundraising drive to support the 2012 general election of President Ernest Bai Koroma. The event attracted diplomats, politicians and non-politicians, business people, some members of the opposition parties and a few other nationalities including Americans.   (Photo:  Honorable Al Aziz Turay and Mr. Alex Bangs of Houston)

Most fascinatingly in that fundraising drive was the presence of a long time serving U.S Ambassador to Sierra Leone, Ambassador Cynthia Perry and the newly appointed Honorary Consul, Honorable Reginald W. Spiller who is based in Houston, Texas. The sudden appearance of Mrs. Florence Turay, a sister of the president Ernest Bai Koroma was an added booster to the occasion.

Sierra Leoneans were overwhelmed by the presence of Cynthia Perry. They danced around the Ambassador, sang and chanted with songs depicting Sierra Leone’s cultural style to honor the former ambassador.

The branch Chairman, Mr. Al-Aziz Turay said in his remarks that the time is now to discuss the challenges facing the country and demonstrated to the audience about how Sierra Leone is recovering under President Ernest Bai Koroma. The chairman paid homage to the president, Ernest Bai Koroma, for devoting to the United Nations principle that enshrines the fundamental rights and freedoms of the people in Sierra Leone in the aftermath of the war. He noted that Ernest Bai Koroma is the only president that has never imprisoned any journalist. Sierra Leoneans are now enjoying free healthcare for women lactate children, a venture that he noted would be a remarkable legacy for the president.

Chairman Al Aziz ascertained to the audience that the November elections would be the most peaceful and transparent one wherein the oppositions would be free to move about everywhere campaigning for victory as well. He urged organizations and individuals to witness the elections of November as observers. In pour commitment raise funds the elections, we as APC/NA will continue to do so in state by state till November 17 when ballot boxes are set to make our choice. He assured donors that their money will be utilized for the reasons it was intended.

In his remarks, the Houston chapter president, Mr. Alex Bangs advised Sierra Leoneans to acknowledge the fact that we are in the Diaspora as Sierra Leoneans and not as our tribal tags. Whether you are a Mende, Termne, Limba, Loko, Krio, Mandingo to name but a few, you have to realize that you entered this country with one passport – Passport of Sierra Leone, he added. Mr. Alex Bangs is the first president of the Houston chapter since it was inaugurated by the APC/NA last year.

The executive of the APC/NA including the president of the Washington chapter, Mrs. Yabome Thaslim Sesay came in full force to accelerate the intended objective of the branch. The Dallas chapter, which is proud to be the parent body of the Houston chapter, also came in a large contingent.

The honorary consul speech and details of the event will be published in a special edition within the week.

UN Peacekeeping: not without our A... 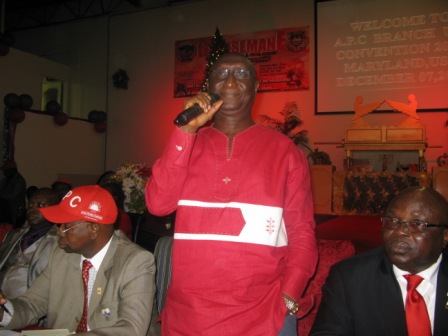