Giving a run down on the trial, the post conflict recovery officer, Patrick J.B Tucker said the Special Court for Sierra Leone is trying Charles Taylor on account of his alleged involvement in the Sierra Leone war.

Adding that although the trail is held in The Hague, Charles Taylor is still being tried by the Special Court for Sierra Leone.

He said the trial is taking place on the premise of the International Criminal Court (ICC).

He furthered that he was indicted with five counts of crimes against humanity, murder, rape, sexual slavery, mutilating and beating, and one count of serious violations of international humanitarian law on the recruitment and use of child soldiers.

In his remarks the national coordinator Youth Forum Network, Edmond Pratt said as a youth organization, it is their duty to keep communities and the school going children informed about the ongoing trial, adding however that over three million five hundred have been transformed from negative to positive.

Giving an overview of the programme, Sallieu L. Kamara said the that Special Court for Sierra Leone was established on January 16, 2002 under an agreement between the United Nations and the Government of Sierra Leone.

He said it was established to try those who bear the greatest responsibility for war crimes, crimes against humanity other serious violations of international humanitarian law and Sierra Leonean law committed in the territory of Sierra Leone since November 30,1996.

He said the Government, UN and development partners have agreed that youth employment was one of the three major threats to the country’s stability.

By Mary .I. Kamara

Too many attacks on human rights 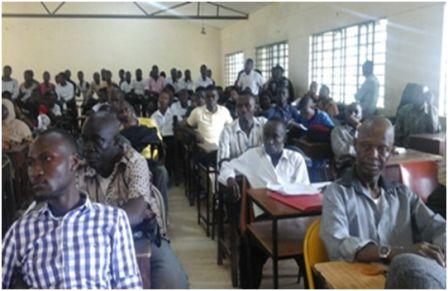