“Though camouflaged as Section 136 of the Criminal Procedure Act of 1965; it seems a judicial ambush; a hidden legal trap though,” a court visitor said.

Shortly after Aziz’s appearance at magistrate court 2 for a preliminary trial regarding charges against him, he was discharged of all the offences against and informed that the matter has been committed to the high court.

Just when Aziz was discharged, re-arrested and arraigned before Justice Nicholas Brown-Marke of the high court, he was refused bail and taken to the central maximum prison where he now serves remand.

Aziz’s impromptu committal to the high court has been seen as an ambush; and a display of judicial scheming.

Court visitors have it that the refusal of bail and re-imprisonment of Aziz bears the trait of serious political tactic.

But the prosecution says it has used Section 136 of the Criminal Procedure Act of 1965, which gives right to the office of the Attorney General to intensely by-pass any preliminary investigation at magisterial levels and commits same to the high court for speedy trial.

Aziz was answering to charges of wounding and other related offences at the magistrate court.

He was charged for wounding one of APC party new converts – Lansana Fadika.

He was also accused of perpetrating violence during the recently held bi-election at Ward 369 in Constituency 104.

During his first court appearance, he was refused bail and sent to the Pademba prison where he spent days before his release.

While at magistrate court II Wednesday 2nd to carry on with his case (preliminary investigation), he discharged of all the offences and later whisked to the high court where again he was refused bail.

It is a fact that there have been skirmishes involving supporters of the APC and SLPP at some stage of the bi-elections in Ward 369 east of Freetown.

Aziz was accused of stabbing an APC supporter – Lansana Fadika.  It was alleged also that an APC member of parliament, Hon. Tunde Liwally was caught using an armchair to break the left hand of Mohamed Kanu Mansaray (SLPP aspirant Ward 369), who later emerged as winner of the election.

He is at present detained at the central prison pending court findings. 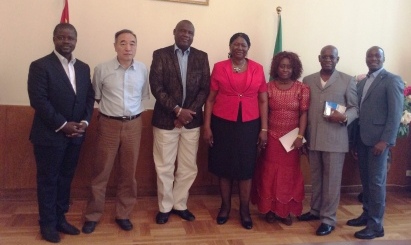 To take up office…Trade and Cultural Att...