Koroma’s diary – Construction of Roads in all Provincial Towns 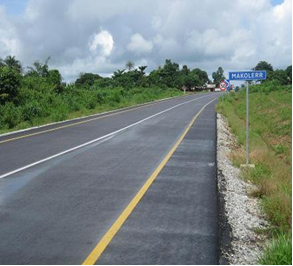 Koroma’s diary – Construction of Roads in all Provincial Towns

A total of 555km feeder roads in Bombali, Tonkolili, Kailahun, and Kono have been completed. Over 780km of feeder roads all over the country are also being rehabilitated through the Rural and Private Sector Development Project and the Rehabilitation & Community-Based Poverty Reduction Project (RCBPRP).

Who monitors these projects?

Spell marks abound questions to President Koroma’s infrastructural benchmarks as far as going by the finished product goal is concerned. There has been a blink in defining President Koroma’s set objectives and goals. One thing spelled clear is the fact that Koroma assumed the mantle of leadership with clear mandates in his manifesto to restore the needs of the people. Separate from those questions are performance contract bond tied around his neck to defend, which makes his achievements a fathom desire. At this eleventh hour, Koroma’s report card is ready, but it would be dishonest in all of these attempts to present his objectives than goals which double speak in less effort.

One case with monitoring programs implemented by the government makes a pointer to the fact that, the time limit of programs implementations is well spent. The more you give lax to contractors they tend to misuse the limits spelled for the execution of those programs.

Media checks on some of these project sites accounts lots of lapses. To start with; the facelift beautification project in the city left so many roads carved with drainages recklessly abandoned. Some of the gutters are presently breeding sites for mosquitoes. To record experience, I met one councilor in the East end of Freetown to crosscheck fact about ongoing trunk roads project in her area following reports in the media that one of the gutters in her community was fracture trap for people traversing it  through the nights. She replied with a typecast of an answer that depicts, it’s not her business at all. What I read in-between the lines was that most of these projects are self monitored by the very contractors. Calaba town is one clear example where the roads are moribund, but this is surprise to say some of those roads were included in the list of roads mentioned for rehabilitation in the city.

The pinned fact under this is that, the system is letting loose of concrete facts to hold from which to build their facts of achievements. If infrastructure were to be a campaign point or a record of achievement (goal) rather not an objective (the pa bin say e go make that road they…) it should be clear that the president presents achievements that are feasible with locals. I mean good road in an area must be feasible and save quest in explaining what the president has done. The people should be the ones to tell what their president has done for them. To be continued next edition. Keep sight to this column.