Upon the appointment of David Ben Bassat as Sierra Leone’s voluntary consulate to Israel (last year 2011), he visited Sierra Leone and paid a courtesy call to the country’s First Lady, Mrs Sia Nyama Koroma.  His visit however brought to the limelight, the need to provide dialysis machines which, in the past and up until 2011 was lacking at the central government hospitals.

After his returned to Israel, David willingly purchased two dialysis machines, but afterwards realized however that a lot more needed to be done for Sierra Leone in terms of ‘use and professional know-how’ of the acquired machines.  David then approached the Ministry of Foreign Affairs in Israel; agreeing with them to help the newly appointed honorary consul to Israel to locate doctors for the training of Sierra Leonean doctors and technicians on the use of the purchased dialysis machines.

Professionally, David is a famous Radio personality in Israel. He owns 3 radio stations, and has served as President of the Organization of Radio Operators in Israel.  David’s visit to Sierra Leone in 2010, saw a meeting with the First Lady, who in the interest of health requested the former (David) convince the government of Israel to give a helping hand to the Sierra Leone government and possibly provide the country with a dialysis machine as it did not possess one.

After the acquirement of the two dialysis machines, the goods were flown to Sierra Leone and straightforwardly delivered to the management of Connaught Hospital in Freetown.  An expert Israeli doctor was later flown to Freetown to inspect the facilities at Connaught Hospital and give professional advice as to what needed to be done and not done.

It is expected also that in a weeks times, a team of Israeli doctors, nurses and technicians will arrive in Freetown to install the donated dialysis equipment.  It is disclosed however that after the installations, the machines will be officially handed to management of Connaught Hospital for use.

It’s been professionally told that dialysis machines are used to help cure persons with kidney and blood related problems.

Tegloma Federation Leaders on a hu... 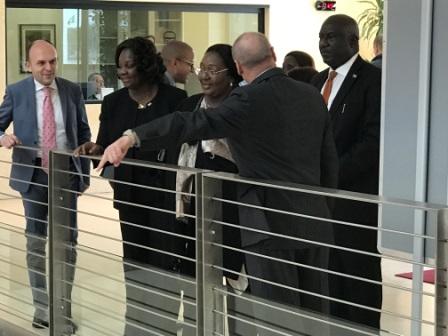