The secretary to the President E.B. Osho Coker has written a memorandum addressed to the clerk of Parliament urging the letter to pay Justice Ademusu a monthly salary of Le12m (twelve million Leones) per month. Justice Samuel Ademusu (in photo) was on the bench for more than thirty years. He was one of those judges brought in by government to serve on contract because of shortage of personnel on the bench.

However, some eyebrows were raised concerning the impartiality and independence of such a judge especially if he is to preside over matters with government interest.

An example was when Mr. Charles Margai, in representing Mr. Omrie Golley in a treason matter objected to Justice Ademusu presiding over the matter saying that the ends of justice would be non trying to please his masters.

Also, the commission set up by government to investigate the conduct of three High Court judges is get to start proceedings as Mr. Charles Margai has objected to a retired judge serving as chairman of such commission.

According to Mr. Margai, Justice Cowan is no longer a judge therefore he does not qualify to hold a position which requires a person qualified to be a Judge of the Superior Court of the Judicature.

Justice Ademusu is a retired Judge. The secretary to the president is not only insisting that the gratuity and pension of a retiring Judge should not be varied to his disadvantage.

This means that in addition to his gratuity or pension, the secretary to the president is proposing that Justice Ademusu as chairman of the political Parties Registration Commission should remunerated as follows:

The tone of the secretary to the president’s memorandum to the clerk of parliament seems to be instructive other than proposing. Paragraph (2) of the memorandum reads “I invite your attention to section 4 of the political parties Act 2001 which provides that the chairman should be paid such remuneration and allowances as parliament may approve but any such payment should not be altered to the detriment of the chairman or any other member”.

The former secretary to the President James Sampha Koroma’s reputation became disturbed when he tried to let Parliament approve the sum of Le 24million as salary for the president. Questions have been raised over two issues relating to the appointment of Justice Ademusu as chairman of the PPRC.

The first is that if that position is to be held by a person qualified to be a Judge of the superior Court of the Judicature, he is not entitled to that post as a retired judge.

The second is that Justice Ademusu is a Nigerian who should be to his home after serving the Sierra Leone Judiciary for over thirty years.

“Of course there are Sierra Leoneans fit to hold that position,” said a concerned citizen.

President Koroma is the chosen one... 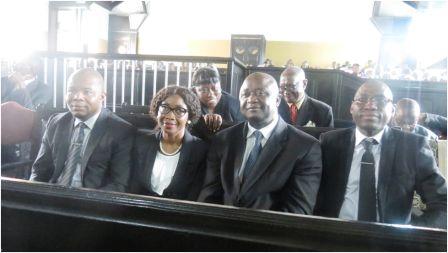