Indeed, it was on a day like this fifty years ago that the Republic of Sierra Leone deservedly gained its independence through the resilience and tenacity of a patriotic group led by the late Sierra Leone first Prime Minister, Sir Milton Margai when he led a delegation to Lancaster House, in the United Kingdom in 1960. And, as a result of tough negotiations, Sierra Leone was declared a sovereign country on 27th April, in 1961.

I would, therefore, like to take this golden opportunity to heartily felicitate our dear president His Excellency, Dr. Ernest Bai Koroma and my fellow compatriots the world over on the occasion of the 50th independence anniversary of our beloved Sierra Leone. On a unique occasion like this, Sierra Leoneans have every right to celebrate with pride and joy. True, our joy is even compounded when we realize that the occasion has come at a time when Sierra Leone is being led by such a charismatic, patriotic and truly focused leader in the person of His Excellency, President Dr. Ernest Bai Koroma.

President Koroma deserves a big and heavy applaud from every well-meaning Sierra Leonean for the long strides he has so far taken and the gigantic projects he has committed himself to carry out, all with the sole aim of rebuilding and developing our country.

In the same vein, all our former leaders starting from the champion of our independence, Sir Milton Margai, and those who followed him in the persons of  Albert Margai, Siaka Stevens, Joseph Saidu- Momoh, and Alhaji Dr. Ahmad Tejan Kabbah deserve our congratulations and appreciation in their own rights for having the mandate to lead our beloved country.

Having stated all the above, I would like to now address my fellow compatriots in the Diaspora. Undoubtedly, the enormous effects of the brain drain syndrome are no hidden fact. It has adversely affected our entire African continent. There is certainly no African country that has not paid the costly price of brain drain; and of course, it is every likely that the Continent will continue to suffer from this unfortunate trend unless African governments realize that they are primarily responsible for the loss of their highly skilled and professional citizens whose contribution is, by all means, vitally and highly needed in the process of nation building.

According to a study conducted by Dr. Henry Kyambalesa, an adjunct professor at the College for Professional Studies’s MBA program at Regis University in Denver, in the United States, and the Founder and President of the “Agenda for Change’ party in Zambia, the United States alone  admitted 32,317 of the African continent’s skilled human resources between 1993 and 1995. And according to the World Bank Group, nearly 70,000 qualified Africans leave their home countries every year to work in industrialized nations. These facts are, of course, tremendously nightmarish for a continent that is still struggling to feed its nations.

True, there is no country in Africa that would blame its citizens for leaving their countries in search of greener pastures elsewhere. However, it is incumbent on Africans in the Diaspora to realize that they owe a lot to their countries that bred them and, in most cases, which also trained them and made them into what they are today, regardless of all the inevitable odds and pains taking adventures that they might go through if and when they decide to return home.

In this regard, and on this remarkable and historic occasion of the 50th independence anniversary of our beloved Sierra Leone, I wish to appeal to all Sierra Leoneans in the Diaspora to reflect upon the various meaningful contributions each and every one of us can make in the process of building our nation.  Our various standards of living that we enjoy abroad notwithstanding, we must realize that it is Sierra Leone that we should all be proud to belong, and it is towards Sierra Leone that we should gear our efforts and energy, for, in the final analysis, we will come to realize that there is place like home.

We must stop prioritizing the self. Instead, it is the soil of Sierra Leone , the rivers, the swamps, the  bungalows, the beaches, the hills, the mountains, the trees, the forests, the jungles, the fauna and flora, and , above all, the people  of Sierra Leone that should be our priorities. We should all, each in their capacities and areas of knowledge and professionalism, make it a point of national duty to once again transform Sierra Leone into the Athens of Africa that it used to be in the pre and post independence eras until political anarchy and the blind love of the self ate up the goodies of that golden era. It is the responsibility not only of the government of Sierra Leone, but, rather, the responsibility of us all to ensure that Sierra Leone once again becomes the vibrant economic heavens it used to be in the 60s and 70s. Because of Sierra Leone’s economic growth and unique hospitality in the past, it was the enviable destination not only of citizens of neighboring African counties; rather, it became the constant destination of Middle Eastern citizens such as Lebanese and Syrians, and Asians as well.

Fellow Diaspora Sierra Leoneans, it is indeed high time we positively became enviously jealous of our various countries of residence and strove to emulate them in their developmental successes and achievements so that in the final analysis our beloved Sierra Leone becomes as flourishing as those countries.  Yes, it can be done. All it requires is determination coupled with true patriotism.

I believe we should rally behind the current leadership and try to complement the efforts being exerted by President Ernest Koroma and his Government to improve the living standards of our compatriots in the country. We should all think of Sierra Leone as our final worldly abode.

If that is how we view it, then it is our responsibility to help make Sierra Leone a paradise, not only for ourselves and our offsprings, but also for the generations yet unborn.

Perhaps it is worthy to note that, President Koroma, in his Agenda for Change’ program, made it of point of duty to cater for not only his nationals inside Sierra Leone, but for those in the Diaspora as well. In this regard, he ordered to open a special office for the Diaspora citizens and gave them every support they needed to encourage them to contribute meaningfully in nation building. That act of the president left no doubt as to what kind of nationally concerned president he is. By all standards, it was an unprecedented move that should be appreciated and highly commended by all Diaspora Sierra Leoneans.

We, in the Diaspora, should explore every possible avenue to help our country. We should try to encourage and lure potential investors to explore the God-given natural resources Sierra Leone is abundantly endowed with. We should strive to erase that tainted ugly picture of Sierra Leone as a war zone so that foreigners will have a clear clue of the great investment opportunities they stand to enjoy. Definitely, this requires both concerted and relentless efforts upon us all. We should make the development of Sierra Leone as part of our daily agenda. After all, it is our country and the only place where we can totally feel comfortable.

I would like once again to congratulate all of us and thank all those distinguished guests of ours who sacrificed their precious time to take part in this most joyous occasion of ours. 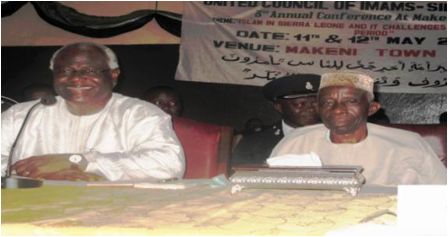