Such, as mentioned above, was done under the UPF character education initiative pilot project for secondary school pupils.

Persons certified are expected to act as Ambassadors in the spread of the message of peace and non violence at the relevant schools and peace clubs.

In her address to pupils at the Pikin to Pikin movement office at Macdonald Street, UPF’s President, Alice M Kamara, admonished all that character maketh man; a quotation that is borrowed from the Bible.

She adds: “without character man is like any animal. UPF, she said, is particular about the character of our future leaders, and it is the reason for the initiation of such a project.

Ms Kamara emphasized on the saying ‘catch them young,’ which she says is the rationale behind their targeting of younger people.

“The kids are our leaders of tomorrow. If we fail to groom them well, it will tell on our society,” she said.

“UPF project” she maintained “is tailored for pupils and has been labeled as a peace initiative organization.”

The Chairperson, Haja Afsatu Kabba, revealed how UPF was built on the foundation of religion for humanity.

She noted however that character comprises Strengths, Weakness, Opportunities and Threats – ‘SWOT’ and operates on different physiological levels.

She encouraged the pupils to never be downhill, but always construct themselves on the basis of self confidence.

“I ask of you ‘leaders of tomorrow’ to inculcate the doctrine of self respect on those things that you possess, obey, and avoid being aggressive,” cultured and worth rating Haja Afsatu Kabba said.

“UPF’s founder, Reverend Moon, believes in the dissemination of the message of peace and uniting the world.”

While giving his keynote address, the Deputy Minister of Education, Youth and Sport, Dr Lansana Nyallay, said character is about teaching, learning and practicing of principles, values and believes that defines culture and nation.

He said that in President Koroma’s ‘Agenda for Change’ he clearly pointed out the true meaning of ‘Attitudinal Change,’ adding that, attitude is the daughter of character.

I expect you will become progressive, kind, understanding, and forgiving.  You try to live by example as peaceful and law abiding Sierra Leoneans.,” Dr. Nyallay said.

Alieu Kai Kai, who is the President of Anti Violence Peace club, advised colleagues to stay away from violence and serve as peace Ambassadors.

“Our lives should be an example to others,” he said.

He promised to form peace clubs at schools and calls on all to join him do so.

NAS Holds Sensitization with MP on... 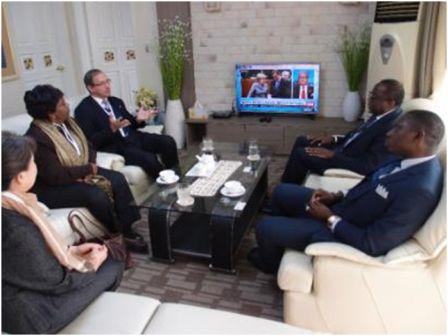