In 2011, Sierra Leone celebrates 50 years of ‘independence’ from the United Kingdom.  Should we be celebrating ‘independence’, or, should we be mourning our festering ‘dependence’ on the former colonial overlord, Britain?  During the height of the Foday Sankoh-led ‘rebel war’ some ten years ago, we got so shamefully dependent on foreign sources for even our recurrent budgetary needs  that a disgraceful 60% came from so-called ‘development partners’.  Over the past four years or so, this has reduced to a less ignominious 40%.      The Leader of the People’s Movement for Democratic Change (PMDC), Charles Margai, is quoted in PEEP of October 23, 2010 as being derisive of his country thus: “Although we are approaching 50, we still cannot feed ourselves.  A 50 year old should be independent and should meet his  own basic needs”.   Even if not literally, but, in our mindsets, the governing elite is still tied to the umbilical cord of Mother Britain.  When the new coalition government in Britain recently announced that it would scale down government expenditure, it sent jitters into the spines of the governing elite; enough for  our finance minister, Dr. Samura Kamara, to raise concerns that  Britain’s financial belt tightening should not lead to reduction in British aid to our country.  In 2009, 47.8 million British pounds flowed through the ‘British-Mother’s’ umbilical cord to ‘fetus-Sierra Leone’.   It is only natural that the British’s  DfID website does not have a high opinion of our country as evidence by these words:“Sierra Leone has amazing mineral wealth, yet 70% of its population lives in poverty …”  Do we have to have British sponsorship for our recurrent expenditure, or, British aid for most of our developmental thrusts, if we are celebrating 50 years of our independence?

Nigerian writer, Paul I. Adujie, in the 2009 article titled, “The Truth about Foreign Aid…” spits out his contempt for Western aid: “….When it comes to foreign aid to Africa, Western nations take ….non-African friends… to metaphorical Five Star Restaurants, treat these non-Africans to sumptuous 14 course meals of caviars, champagne, wines, desserts and at the end, their ‘conscience’ suggests photo opportunity of a feel good type; and in the full glare of CNN and BBC television cameras….Africans are portrayed in dire straits; genuflecting and picking up the leftovers with gratitude and appreciation with so much flourish….” Leftovers for Africans!!  What we call in Krio ‘wehreh’ – food for the ‘slaves’ or the lowest of classes in the household. ‘Na wehreh wate man dae gee we nar Salone’!!!

There appears a growing movement among some African educated elite questioning the logic of foreign aid from the richest countries to poor countries in Africa. In a letter published in the Daily Telegraph of Britain, August 22, 2010,  several African leaders of thought (Andrew MwendaEditor, Independent newspaper, Uganda; Franklin Cudjoe – Executive Director, IMANI Center for Policy and Education, Ghana; Kofi Bentil – Lecturer, University of Ghana and Ashesi University, Ghana; Thompson Ayodele – Executive Director, Initiative for Public Policy Analysis, Nigeria; Temba Nolutshungu – Director, Free Market Foundation, South Africa; Leon Louw– Law Review Project, South Africa ) saw what has raised alarm in Dr. Samura Kamara as an opportunity for radical overhaul of  international relationship between the richest countries like Britain and poorest countries like Sierra Leone:  “The parlous state of the public finances in Britain provides the perfect opportunity for British taxpayers to end their half-century-long experiment with ‘development aid’, which has, since its inception, stunted growth and subsidised bad governance in Africa….. A real offer from the British people to help our development would consist of the abolition of the Common Agricultural Policy, which keeps African agricultural exports out of the European marketplace…….”.

Zambian  intellectual, the youthful Oxford-Harvard university-educated Dambisa Moyo, whose book – “Dead Aid” – earned rave reviews from conservative thinkers in the West last year,  has a very simple message: ‘that outside development assistance is at the root of Africa’s underdevelopment and ought to be stopped quickly and totally if the continent is to progress. She is in favor of private-sector development, even if it comes from China, and inveighs against agricultural protectionism in the North that prevents trade from becoming an engine of growth’.

We need to penetrate the arcane language of finance and econometrics to grasp the relevance of such radical stance by  some African thinkers. For us in Sierra Leone, agricultural export is not our problem.  It is how much we get for our mineral exploitation – some of the richest grounds on planet earth. Over the past two weeks, our parliamentarians  have been entrancing the populace on live T.V. with  lively debates on national issues on the President’s speech to parliament. Pause.  Challenge!!  Let one of them randomly ask ten of their colleagues MPs this question: “How much is Sierra Leone getting from mining its diamonds…?. Or, rutile?  Or will get from mining its vast iron ore reserves?…” I bet my old Mercedes: 90% of the MPs will not give accurate answers to those questions.  The same for nearly all Civil Society Leaders.  Winning my bet would be a sad manifestation of  our  50 year old babyish thinking.

We have immense mineral wealth in our territory.  We are not intense and persistent in scrutinizing mineral agreements that we enter into.  We don’t debate these agreements in our schools, churches, mosques, labour groups, youth groups, etc.  We don’t insist on setting up monitoring mechanisms as to how the wealth from our mineral wealth is being used.  There is some hope once the Freedom of Information Bill in parliament becomes law we could empower the generality of the educated people to demand accountability and transparency from government – backed by peoples’ power of the majority.  Thus, it can be said that when we emulate Liberia to have a Freedom of Information law in Sierra Leone we will mutate from being ‘50 year old babies’ into being real 50 year old adults’ – the best gift that our parliament can give the people of this country for our fiftieth independence anniversary celebrations.

Another aspect of growing up from babyhood into adulthood in our country would mean working harder.  And, contributing towards the common national pot – what tax theoreticians have termed as ‘Contributive Justice’. That is, all in the state called Sierra Leone enjoy from the proceeds of taxes – in the form of the military guaranteeing security from external aggression; the police ensuring security for normal civilize life to go on; we enjoy the roads, electricity and water supply  which government provides. These services are enjoyed by all because government taxes the work of some people, some business, and shares it to all of us – what is known as ‘Distributive Justice’.    The Goods and Services Tax (GST),  legislated by our parliament, and being implemented by the National Revenue Authority (NRA), as a consumer tax  charged to every consumer for a lot of products bought across the counter, is a better way to ensure that everybody pays some form of tax – that is ‘Contributive Justice’. More has to be done in the sphere of Taxation Justice, and, implicitly, meaningful independence for Sierra Leone.

There is the likelihood of scary smuggling of goods into and out of the country, with government being denied enormous revenues.  On January 26 this year, during the celebration of World Customs Day at Customs House in Cline Town, the President of the Chamber of Commerce, Industry and Agriculture, Babatunde Cole, warned that the introduction of the computerized ASYCUDA++ system (ASYCUDA++: created by the United Nations Conference on Development and Trade [UNCTAD], and known world wide as “Automated Systems for Customs Data”) in the clearing of goods at Customs in the NRA –making more efficient and transparent the import/export business; making it almost impossible for corruption to take place in that sector – could lead to more smuggling by those who have been used to beating the system.   As we think more independently, all of us, especially our elected leaders, must think in terms of mobilizing millions of our citizenry to thwart smugglers, who one youth group, Youth Arise!!!,  has described as ‘economic murderers’. Indeed, even from our domestic taxes alone, Sierra Leone has the potential of being 100% financially self reliant for its governmental expenditures.  The issue of plugging our tax holes, ensuring Taxation Justice,  must not be made into a partisan issue – an APC, SLPP, PMDC affair.  Taxation Justice must be approached in an aggressively patriotic way, even, with nationalistic feistiness – if we are really to be joyous  for our independence not being melancholy for 50 years of dependence.

As we grow up to become  ‘50 year old adults and not 50 year old babies’, we have to popularize such studies:  ‘Administrative Barrier Study – Phase I, written by the Government of Sierra Leone by the Foreign Intervention Advisory Service (FIAS) of the International Finance Corporation (IFC) and World Bank grop, March 2005…., which states: ‘Much work has been done in identifying other barriers to investment in the private sector in Sierra Leone, including economic and political instability, infrastructural deficiencies, administrative barriers and corruption….Throughout this investigation two common issues appeared consistently:  (1) the economy operates on an informal and formal level, the former of which dominates; (2) lack of information availability and flow hampers the ability to invest and operate a business….(informal) economic activity seriously constrains economic growth and poses a threat to the rule of law, and the lack of information flow forms a strong deterrent to both domestic and foreign investment…..”.

What the above simply means is this: there are tailor shops, boutiques, taxi and okada owners, carpentry shops, welding shops that are NOT paying their due income taxes, corporate taxes, Pay-As-You-Earn (PAYE) taxes; not contributing to the common tax pot – yet, are making demands on government for good roads, payment of nurses and teachers, electricity, etc.  Here again, a Freedom of Information law would energize a lot of private sector institutions to monitor such informal sector institutions escaping the tax net. We cannot claim to be independent and continue with such disgraceful way of organizing our society.  The British money we depend on to run our government are got from British taxpayers – ordinary British teachers, factory workers, hairdressers, hoteliers, financiers, etc.  When we take care of such small matters as paying our taxes voluntarily, then, we have the moral authority to fight against the perpetuation of what late Guinean president, Sekou Toure, would rail against as ‘neo-colonialism’. 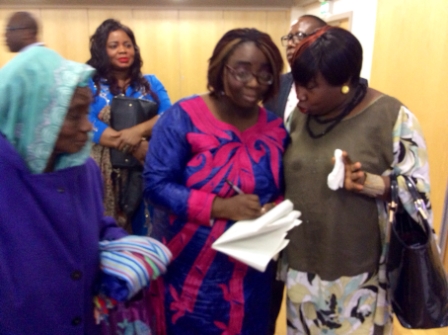