The activities of the Freetown City Councilâ€™s Metropolitan Police have left residents of the Freetown municipality to wonder whether these guys are real law enforcers or thugs in city officersâ€™ clothing. (Photo: Abdul Karim Kabia aka Roaming Pen)

The way and manner in which these metropolitan police execute their â€˜dutiesâ€™ in various parts of the Freetown municipality has become of grave concern to peaceful citizens.

It is no news that they act more like law breakers/thugs rather than the law enforcers/police they are supposed to be.

The Metropolitan Police are primarily tasked with the responsibility of enforcing the bye-laws governing the operations of the Freetown City Council (FCC).

But on the contrary, they beat and harass people with impunity under the pretext of enforcing councilâ€™s laws.

How and when do manhandling and harassing of peaceful citizens became part of the bye-laws of the FCC remains a mystery.

Most unfortunate however, is the fact that the metropolitan policemen have no hesitation in publicly raining abuses (mammy curses) on peaceful citizens, sometimes in the presence of children.

They take the law into their hands and openly boast that nothing will come out of it as they have the orders from the hierarchy of the Council. What has been considered as an endorsement of their actions is the fact that these acts continue unabated, irrespective of the fact that several complaints of that nature have reached the desk of the Mayor.

At one instance, I was forced to address an open letter to the Mayor when his Metropolitan policemen stormed the central business district of PZ like wild rebels, beat up traders and taxi drivers alike, and later bundled the bleeding victims into waiting trucks. Till date, nothing has come out of it (BUFF CASE!!!).

With the aforementioned realities, it was no surprise to me when I recently witnessed a nauseating scene involving the Mayor himself.

FCCâ€™s Herbert George Williams was driving enroute Cassava Farm along the Goderich Peninsular Road when he came across a commercial bike rider who was openly urinating in a urine-free area. Notwithstanding the fact the bike rider was in conflict with the law, onlookers were gripped with shock and disbelief to hear the unprintable invectives emanating from the â€˜nobleâ€™ mouth of the City Father, when he disembarked his vehicle and personally accosted the defaulting bike rider. The least said about that the better, but it speaks volume of the â€˜mammy cursesâ€™ and violence being unleashed on a daily basis on peaceful citizens by Herbert George Williamâ€™s officers. It also lends credence to the popular adage: â€œLike father like sonâ€.

In every corner of the city, metropolitan police are busy destroying market stalls of petty traders; a process that is never complete until after they would have mercilessly flogged non-resisting traders. Almost all of the petty traders being dislocated complain that they are always ejected few days after the city council would have collected huge sums in taxes from them with assurances that they will maintain their trading positions. What madness is this? This act is not only unfair to the traders in a time like this, but can also be best described as broad daylight fraud. Why do the Freetown City Council collect these monies from the traders with bamboozle assurances. No wonder the numbers of conmen are increasing on a daily basis, with the city council officials/guys making matters worse.

Almost everything about the manner in which the city council operates is becoming irritating. The methods of tax collection, including but not limited to mounting of road blocks, are also becoming a cause for concern. Mounting of road blocks in the city in a desperate effort to intercept vehicles to check for local tax receipts is very unacceptable in this modern world of ours â€“ 21st century. This method is subjecting people to undue delays in vehicular traffic jams.

There are several ways of collecting local tax receipts but most of the methods the City Council is using can best be described as archaic, chaotic and unlawful.

Council officials at these checkpoints have also proved arrogant and boorish in asking people to display their tax receipts. They are always on the alert to beat up and rain unnecessary insults on people.

The behaviours of these city council officials totally contradict the ethics of public officials and policemen.

Public officials are expected to be polite and approachable, whilst police officers are expected to enforce law and order using minimum force. But this cannot be said for officials and policemen of the Freetown City Council who always consider themselves as being above the law.

We all know the implications when law enforcers transform themselves to law breakers and most of the municipality residents are no strangers to these repercussions. Several residents have already received their own portion of the beating and abuses from the council officials whilst others expect theirs sooner or later.

The Freetown City Council continues to collect huge sums from the citizens in taxes on a daily basis in a non transparent manner and there is no doubt that the monies collected by FCC are not commensurate to â€˜projectsâ€™ undertaken by the Council.

Calls for the council to make public their income and expenditure always fall on deaf ears. There is no willingness on the part of the FCC to make its operations transparent and this has become a cause for concern to the citizens.

The excesses of the FCC are uncountable and the need for sanity in the FCC cannot be overemphasized. Hope somebody is listening. 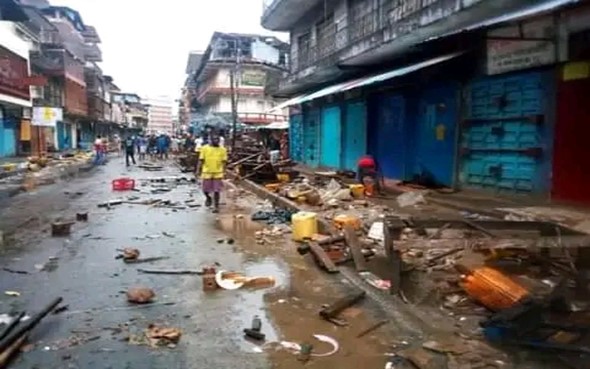