The truth about Milton Margai School for the Blind

The truth about Milton Margai School for the Blind

Having heard so much via the media about the deplorable conditions of some blind school students at John Michaelâ€™s area along Wilkinson Road in Freetown, the Director of Foundation for Democratic Imitative and Development, Hindowa Emmanuel Saidu and cross section of his staff visited these children. (Photo: Acting Headmaster of Milton Margai School for the Blind, Mr. Albert Sandy)

Upon arrival at the slum area, the director had a meeting with these children who bitterly complained about maladministration at the Milton Margai School for the Blind.

The children alleged that the Acting Headmaster, Mr. Albert Sandy was not a good administrator and that he was in the habit of maltreating them. They also told the director that Mr. Albert Sandy has denied them the right to education by asking them out of the school. They also stated that frantic efforts have been made to draw government attention to their plight by way of protest but said their case is yet to be addressed by the authorities concerned.

In a meeting held in the headmasterâ€™s office on the 16th June 2010, the head master explained that he is sighted and very strict therefore these children do not want him. â€œIn all of my travels I have never seen a blind man heading a blind school,â€ the headmaster said, adding â€œI have been in this acting capacity 2006 and I have done all in my power to maintain discipline and sanity in the school.

He denied expelling any student but that it is the students who pack their bags and leave the campus on their own free will.

The Director also spoke to three teachers who openly supported the acting headmaster. Miss Princess Swarray and Mr. Kargbo, both blind teachers, told the director that the children abandon the school because they do not want to go by the dictate of the administration.

Mrs. Davidson, a British national who is a worker at the school, said the acting headmaster is straight forward and a disciplinarian.

The headmaster used the occasion to inform the Director that government has not given subvention for two quarter allocations, which he said has obliged the administration to constantly lobbing some humanitarian agencies for the up- keep of the school.

He further explained that some funding agencies have refused to support the school until the ministry report is out. The Ministry of Education had conducted an investigation into students protest but the report of the investigation is yet to be released to the public.

The Director, Hindowa Saidu was taking on a conducted tour of the campus where he was shown newly renovated staff quarters, a newly constructed stage for official events and a well equipped library.

In an interview with this medium, the Director of Foundation for Democratic Imitative and Development expressed dissatisfaction over the way and manner government is handling the affairs of the blind school.

With tears in their eyes - Parents...

At lastâ€¦ Police promotions out t... 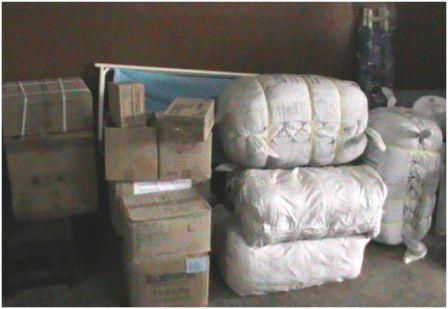