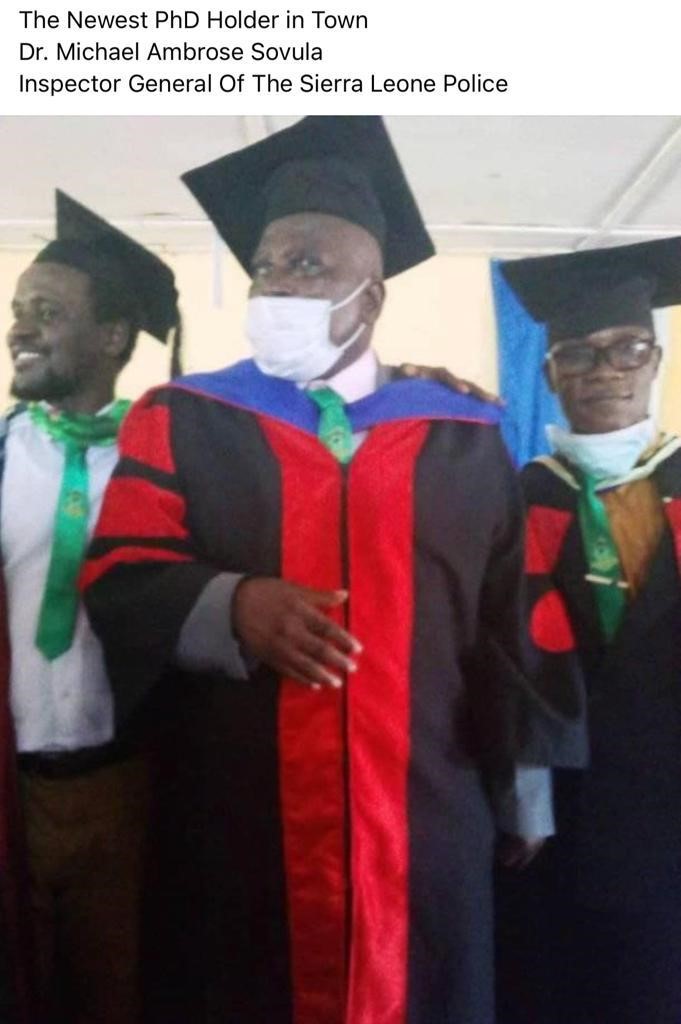 What seems to be the order of the day is the possession of Doctorate degrees, even by people who could hardly construct a full sentence in English. Whether it is to show that they are fit to occupy certain positions, or simply comparing themselves to other technocrats in the country, including our international partners. (Photo: Under the Mango Tree PhD of Dr. Sovula)

These have carried themselves with an air of importance and would often boast of being holders of the almighty PhD. They love to be seen, recognised, called and addressed as Dr … and failure to address them as such meets scolding. During interviews, they will always interrupt to tell the interviewer their title (Dr). This obsession has seen many going to all lengths to obtain the Doctorate title, by hook or by crook. Well, the latter was the case last weekend, as a number of such recipients gathered, of all places, under a mango tree to receive that Doctorate title. Among them were top personalities in the current regime.

What beats the imagination is how did they not realize that the whole thing was a charade, especially when it is clear that the ceremony simply took place under a mango tree, instead of a University auditorium, or even a classy building.

Well the whole issue was not where the doctorate title was conferred on them, but simply that it has been conferred on them by some Chancellor. The recipients were all in smiles, as if that was the best thing that had ever happened to them in their whole life time. Unlike proper recipients of the Doctorate degrees, who received them on University campuses, most of these brag about their degrees. This rather unfortunate scenario will derail the educational system in the country, and has the proclivity to push young people to going for fake degrees.

What is most alarming is that some members in the Bio administration have their names of the list of recipients of the Doctorate Degrees from the Dominion Christian University, a University that has not got the go ahead from the TEC. What the so called University failed to realize is that Universities like the MMTEC, IAMTECH and others, took years to get the right to confer degrees on their students, and most often did their programs in consonance with other recognised universities in the country. The Dominion Christian University is now a laughing stock in the country, as it is being described as the Mango Tree University.

According to sources at TEC, the action of the said University over the week end is said to be illegal and the certificates given to the various recipients, also seen as fake. It is said that so many people have had degrees given to them from this very college, who are working in the government, and the President is being prevailed upon by members of the public to strip those people of those titles, as they are all illegal and fake. Such individuals do not deserve to be in any position of trust, especially as their academic credentials have been dented by this singular act. What guarantee does one have that the other qualifications they claim to have, have not been obtained in this same manner from mushroom universities and colleges?

How many of these are Civil Servants, Parliamentarians or even working in the President’s office. I sit a wonder then to see that much is not delivered by these people in the Bio government. They simply lack the knowledge and ability to understand the running of government, and would often get angry when accosted by journalists on certain topics. With the amount of so called technocrat in the Bio government, one is not expecting the kind of result that is being seen. Few in the Bio government are known for their expertise in their respective fields, because they are the original degree holders. They burnt the mid night candle studying to get their degrees. The likes of Dr Moinina Sengeh will be trembling with anger to think that people could be so callous to buy doctorate degree that he suffered to earn. It is not surprising that he is performing in his own field. Will it surprise people to see the amount of corruption taking place in MDAs, as documented in the Auditor General’s Report for the past years?

The African Graduate University (AGU) on 4th April 2022, issued a release in respect of the Doctorate Degree of Dr. Sovula , Dr. Paran Tarawallie and Dr. Mohamed Yamba Bangura, describing posts against their doctorate degrees from the AGU as a plan to destroy the personality of the aforementioned officials.