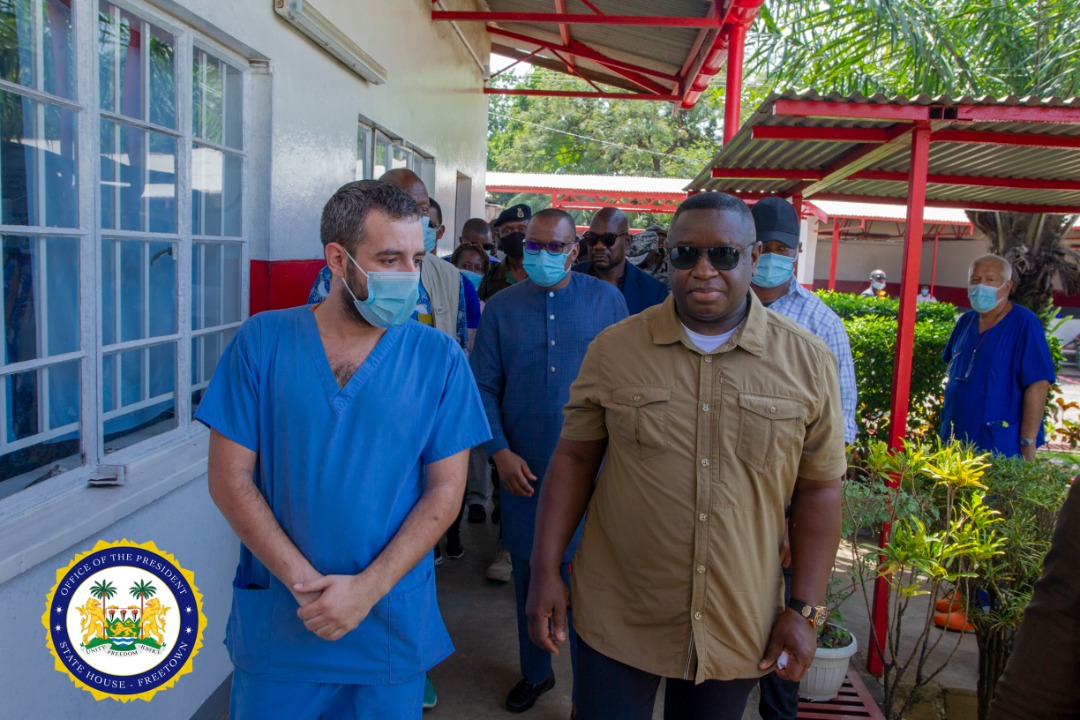 Freetown, Sierra Leone, Sunday 7 November 2021 – His Excellency President Dr Julius Maada Bio has ended his visits to survivors of the tragic fuel tanker explosion who are now responding to treatment at the Emergency Hospital and Choithrams, after addressing and sympathising with people at the scene of the disaster and beyond.

At Wellington, the President was received at the fire inter-agency briefing centre of the National Disaster Management Agency, NDMA, where the incident manager, Sinneh Mansaray, briefed him on the collective effort of responders, among them local and international nongovernmental organisations.

“NDMA has coordinated the removal of 100 fatalities from the scene. Data collected from three main hospitals – Connaught with 148 casualties, among them 93 dead; 34 Military Hospital with 21 casualties and 6 dead and at the Emergency we have 18 casualties with no death reported so far,” he said.

Addressing a large crowd of community people from on top of a pickup truck at the scene of the disaster, His Excellency President Julius Maada Bio said he was there to sympathise with his compatriots who had lost their relatives and pray for those who are in the hospitals.

“Let us be law-abiding. We have lost over 100 of our compatriots in a single instance and now we are struggling with about 100 survivors in the hospitals. This is a moment to come together and avoid the blame game. We must come together as a community and deal with this disaster. We must say never again will we make such a mistake,” he said.

Minister of Health and Sanitation, Dr Austin Demby, said apart from the 6.6 tons of medical supplies, 1 ton of which arrived today, and the rest expected by tomorrow, the World Health Organisation had identified 3 out of its network of burns experts to come and conduct a proper assessment of the medical needs.

“We are also engaging WHO locally. We are using a phased-out approach, starting with plans for the next 48 hours, strategising for the next 7 days for actual stabilisation and eventually embarking on sustained maintenance for the next 30 days and beyond,” he said.

He disclosed that they were working on and would eventually present a list of all the biomedical supply needs for the next 30 days to the President, adding that they had already deployed all the supplies they had because they didn’t want to wait for foreign or external supplies and interventions.