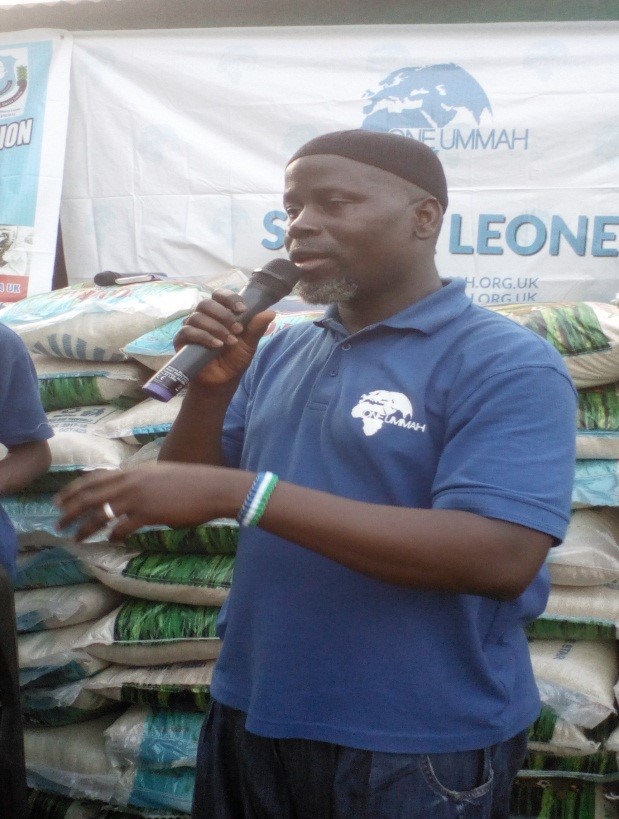 A non-profitable Islamic organization known as ‘Tawheed Foundation’ has brought smiles on faces of hundreds of Muslims by donating three hundred bags of rice at Karene and forty bags of rice at Tonkolili Districts with other food items comprised sugar, onions, salt and vegetable oil worth millions of Leones.  (Photo: CEO, Sheikh Abdulrahman Bangura)

The Karene District donation was distributed among beneficiaries last Thursday while Tonkolili District received their gifts the following day on the theme “feeding the poor and needy in the holy month of Ramadan”.

Speaking at the donation ceremony, the Chief Executive Officer CEO for the Tawheed Foundation, Sheik Abdurrahman Tejan Bangura from United Kingdom described the foundation as a local NGO established in 2006 adding that their visitation to those deprived and vulnerable societies is to continue with the services they have been rendering in that part of the country.

He said they designed Karene District as the host village for the project because he said, it has been forgotten with less Government services. “We have sponsored lot of operations on diseases affecting men”, he told listeners and continued that they have constructed a beautiful primary school and have solarized the Roshaka Village which is now helping children to study at night under the bright light”, he said. He said every year; they bring food items not only to help Muslims break their fast but to demonstrate that there are people at the corner who always thinking about their normal existent and welfare. He promised to extend the project to many other villages and highlighted that they have commissioned two water wells at Port Loko District.

He explained that they would go to Bombali District in Makeni to cook and distribute food among the poor and needy and mentioned that the foundation is currently sponsoring fifty orphans in Bo District with tuition. He disclosed that they would also have to move to Kenema and Kabala Districts respectively to do same.

On the issue of challenges while carrying their distribution exercise, Sheikh Bangura intimated that expectation among people was too great especially when they heard of free gift even the undeserved people rushed in the line despite the fact that the foundation was targeting only the elderly and children as supposed beneficiaries. He also disputed the fact that it was very difficult to travel with three hundred bags of rice and other numerous items to that part of the country as a result of expensive transportation fares and poor road network. “Our focus as a charity organization is to serve Allah/God through humanity”, he told audience and advanced that prayer and pilgrimage or Hajj are fundamental pillars of Islam but as an Islamic union, the learned Sheikh said, they wanted to see Muslims worshipping Allah/God with relief. He discussed that taking the sick to hospital is a practical solution to help the poor and the uncared for and encouraged beneficiaries to lean on them and look forward to their assistant. He spoke about the many projects they have on the pipeline and proclaimed that the primary school at Rosheka will be opened come September, this year for the children to enjoy free education under the umbrella of the foundation.

He said the school will provide an enabling environment with spacious classrooms for the children to learn and reiterated that they would soon come to launch an orphanage. He deliberated that they decided to build school in the village to encourage girl child education because he said, their ancient people does not believe in girl child education. He explained their plan to encourage farmers to embark on massive agriculture to feed themselves and the nation at large. He explained that, many a times, crop farmers have been complaining cattle rears of letting their cattle to eat their crops and overgrazed the land. He discussed that to prevent confrontation between crop and cattle farmers, they have bought quantity of barbwire to fence a community garden and plant vegetables to feed themselves and presented in the market for sale.

He said there is also plan to construct a bakery so that people would be prevented from walking seven miles away to Gbonkobana to buy bread.

One of the beneficiaries of Roshaka Village, Sanda Tandaren, Kadiatu Bangura said she was happy for receiving such a great gesture and emphasized that she has been struck with abject poverty and hunger but the foundation has brought a relief to them. She prayed for God to continue blessed the foundation so that they would continue to help the poor and needy.

An old woman from Rogbaneh village, Yabom Sesay said she came from far distance as a widow who have lost her husband for quite a long time to have food to eat. According to her, she has nobody to help her since she lost her husband and all her six children.

Another beneficiary at Malkia Village in Tonkolili District, Alieu Yateh also expressed happened over what she described as timely donation adding that the gesture will help them continue with the Ramadan fasting as she said, they started the month with nothing as poor farmers.

“We appreciated this effort and we prayed that God prolong your life span on earth so that more less privileged people would benefit out of the project”, she told the donor foundation and promised to consume all items given to her together with her children.

Memunatu Kuyateh of Malkia said the gesture will help increase their faith, multiply prayers and come closer to Allah/God and concluded by praying for God richest blessing to touch the foundation and management.