Napoleon Koroma, Kabineh Kallon, Where Are The 200 Dragon Buses? 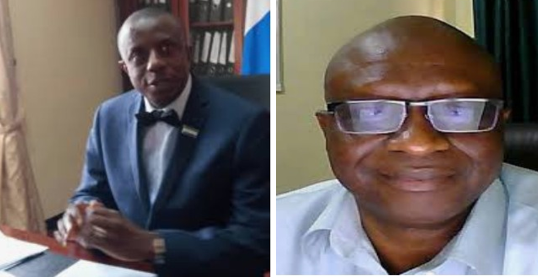 Napoleon Koroma, Kabineh Kallon, Where Are The 200 Dragon Buses?

It is almost a year when the Chairman of the National Commission for Privatization (NCP), Napoleon Koroma and the Minister of Transport and Aviation, Kabineh Kallon, were parading the media landscape in Sierra Leone about an MOU signed between the Government of Sierra Leone and a Chinese Company for the supply of some 200 Dragon Buses to Sierra Leone.

The said Dragon Buses, according to both the minister and the NCP Boss, were the result of a fruitful engagement they had with the company and forms part of the benefits of that huge delegation President Bio took along with him during his trip to Beijing.

The buses they say were to help in drastically reducing the transportation constraints citizens especially, the ordinary man, are facing every day.

However, since that bogus announcement was made almost a year ago, there has been no sign of either the Dragon Buses or any update by those government officials who were all place talking about the said buses and its agreement while the ordinary Sierra Leonean continues to suffer on a daily basis for transportation.

‘Could it be another black lie from the Sierra Leone People’s Party Government?’’ many citizens who spoke to Sierra Express Media asked adding that they have heard so many lies from this government since coming to power almost a year ago.

Some also recalled the promise made by the Minister of Finance, Jacob Jusu Saffa about some 50 School Buses which they say turned out to be a wicked lie as till date, nothing like any single School Bus has arrived in the shores of the country.

Citizens are now demanding from the SLPP Government especially the Minister of Transport and Aviation and the Chairman of the National Commission for Privatization (NCP), to know what had happened to the much talked about two hundred Dragon Buses they faithfully assured Sierra Leoneans of.