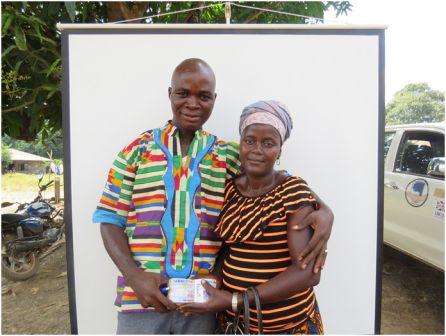 Mammie Kallon beams with smile as she appends her inked thumb to the micro-loan document before receiving the sum of Two Million Five Hundred Thousand Leones. Together with her husband, who also signed as guarantor, they walk to a secluded section in the Gegbwema court ‘barray’, Tunkia Chiefdom, Kenema District, where they will pose with the money on a white background for snap shots.

“We are happy for this,” says Mammie, looking at her husband for his concurrence. “This (the money) will add to our business and we will have more stock and make more profit.”

Despite being a cookery seller for 15 years, Mammie says this is the first time she’s handling such a bulk amount and taking a loan.

The loan scheme is a Small Business Fund (SBF) package under the WHH funded project called ‘Linking Agriculture, Natural Resources Management and Nutrition’ implemented through SEND Sierra Leone and other partners. A total of 30 beneficiaries, including Mammie, were identified through a selection process involving community stakeholders and an assessment of the available businesses in the target communities.

“The disbursement (SBF) is to build up their small businesses and the focus is on the women, because we want to empower them,” says Santigie Kamanda Kanu, WHH’s Head of Project, adding that the women were given prior training in business planning and development.

The beneficiaries are expected to pay back with interest over a loan period of six or eight months; 15% interest for six months or 20% for eight months. In addition, they are encouraged to do personal savings of Twenty-Five Thousand Leones to help them improve on their WASH facilities whenever the need arises.

The project is implemented in three chiefdoms in Kenema District – Gaura, Tunkia, Nomo and Barry Chiefdom in Pujehun District, the latter having already benefitted from the SBF scheme from other partners Karma Kola and AFFA. Ten percent of the total funding of 1 million Euros for the entire project was contributed by the Karma Kola Foundation. The Foundation operates a factory that produces drinks, and donates some of the proceeds to countries from which they get the raw ingredients to produce the drink. In Sierra Leone they get kola nuts as one such ingredient. The focus is on the women, because we want to empower them

The 36-months program started in October 2017 with agricultural activities. Beneficiaries were provided with sweet potato vines and beans which they planted. These are highly nutritious food stuffs expected to keep the people healthy.

“Our wish as an organisation is to transform communities’ perceptions of themselves in everything so as to ignite a spirit of self-led economic development, hence the Small Business Development fund component of our nutrition project, LANN+” says Peter Abdulai, Monitoring and Evaluation Manager, SEND Sierra Leone.

“Even though the project targets 60 women beneficiaries with this funding initiative over a three-year life span,” he continues, “we have every monitoring strategy in place to ensure that one, the right people get the funding and two, it keeps revolving with sustainable benefits until we at least double that target population.”

Meanwhile, Mammie says she’ll invest her new loan capital in second-hand clothing business as she is now tired of the heat in the kitchen having to cook every day. Her husband, a general businessman, assures of his constant support and guidance.

“We fully understand the loan agreement and we will work hard to ensure we pay back with the interest within the stipulated period,” he said.

Are We Really Ready To Tackle Sexu...