Mathor could be President Bio’s Model town in Tonkolili District 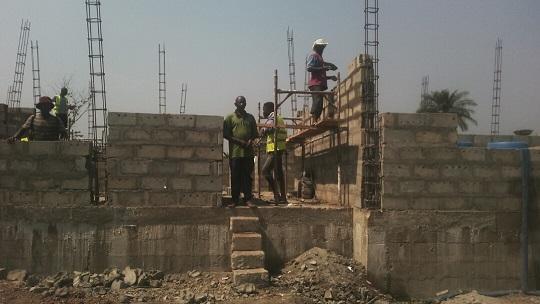 Mathor could be President Bio’s Model town in Tonkolili District

In the wake of President Bio’s manifesto to improve healthcare service all across the country, a new hospital is on a speedy construction to survive the people of Mathor Township and its environs in Yoni Chiefdom, Tonkolili District.

The Head-man of the township, Mr. John Fullah has said that Mathoir hospital when completed will lead among the biggest hospital construction projects that kicked off in later last year. Among other development projects which includes two functioning secondary schools, and an ongoing community center project, this town is going to be one of the largest and most established model towns in Tonkolili Districts, Mr. Fullah asserted.

Based on interview responses about this viable hospital project, many people in the township acknowledged that the Sierra Leone People’s Party (SLPP) government is constructing what they believe is “a new kind of hospital for a new era in healthcare” which according to them, they will have to enjoy as the first hospital in the region to be entirely designed and built by this new government.

The project is a community hospital serving the entire region of Yoni Chiefdom. The people of Mathoir further believe that this historic hospital is a non-profit, non-sectarian, and is not built in no political influence. It is going to be a facility recognized to meet our country’s highest healthcare standards, Despond Sesay in England observed when he visited home on December last year.

The town of Mathoir is importance not only to the district, the country as a whole, chiefly strategic and political. It connects with several Chiefdoms including Masimra and and Marampa Chiefdoms, and is a junction of Makonkary, a town that linked between Mile 91 and Rotifunk in Moyamba Districts. Before this time, many politicians including late Alfred Bobson Sesay and Mr. Mohamed Daudis Koroma, may their souls rest in peace, campaigns showed some wants of strategic purpose.  The late Mr. Alfred Sesay believe that winning Mathoir will obviously lead you to a victory of winning several towns and villages surrounded.  Late Mohamed Daudis Koroma was a native of Mathoir and has done his utmost to ensure the town has a health center and a central market structure both of which benefitting all the surrounding towns and villages.

When view at their political beliefs and ideologies, the people of Mathoir has an ethical principle that they are always in supportive of the government of the day and the leaders of the town educating their subjects to exercise their freedom of choice in terms of political representation.

After completing this project, it will place on record its cordial appreciation of the efforts of this government for its early progress made in improving the healthcare serve in the provinces.

Mathoir town is rapidly expanding. Its inhabitants have formulated development strategies based on long-term visions on social, economic and environmental concerns. The town is a purely political orientation to an entrepreneurial and economic management approach. It has an open market operation on Fridays that brings business people from every part of the country. It has a focal points for economic activities, and engines of economic growth.

Mathoir has two secondary schools, two primary schools, a health center, and in completion of the hospital project in a vastly growing community obviously qualifies it to President Bio’s model town in the Northern Province.

Is Victor Foh A Blessing Or A Curs...