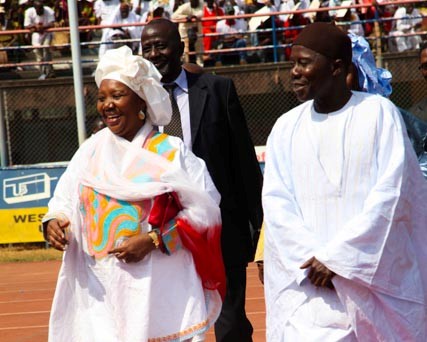 Well, she has died after a protracted illness, that’s according to family sources.

May Allah have mercy on her and grant her Janatul Firdaws. Amen.

I remember she was in Mecca in 2013 to perform Hajj. I visited her in her hotel room and had a short interview with her. In that interview, she praised and thanked the Sierra Leone Embassy in Riyadh and its nationals for their role in assisting the pilgrims. Their support, she said, helped the pilgrims perform their pilgrimage with ease and comfort. This is how I reported part of the interview:

Her Excellency Haja Sadiata Sesay  is Sierra Leone’s Deputy High Commissioner to the Gambia. She was amongst the 920 Sierra Leoneans that successfully performed this year’s Hajj.

After visiting the grave of the Prophet of Islam in Medina she said tears of repentance streamed down her face.  “When I arrived in the Prophet Muhammad’s Mosque, Al- Masjid al- Nabawi, where he is buried, I wept bitterly. When they showed me the graves of the first two caliphs, Abubakar and Umar, I continued weeping.  As a matter of fact, I was full of emotions.”  The graves are like the Garden of Heaven, I assumed.