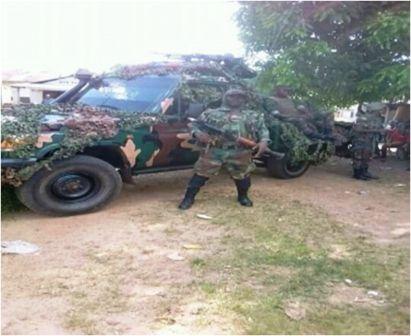 On his way to Makeni last Friday, President Maada Bio looked like he was leading troops to the warfront. The show of extravagant and excessive military power , with mounted artillery , machine guns , rocket-propelled grenade machines and soldiers (armed to the teeth  with M16s and AK47s ) in combat and camouflage  fatigues and vehicles , petrified lots of Sierra Leoneans who wondered whether their country was at war. Though as President, Mr. Bio is entitled to water-tight security, many Sierra Leoneans believed he overplayed the security card for political reasons.

President Bio did not look like he was going on a friendly Thank -The-People tour of the North. It looked like he was leading a whole battalion of combat-ready troops into enemy territory for a merciless conquest. Many people complained bitterly in the social media about the state of fear President Bio provoked last weekend.  They believed that Bio’s conduct showed what he thought of the North—-Hostile enemy territory. People could not understand why Bio perceived the North as a theatre of hostility towards his personal safety and the security of his government to the extent that he had to travel with a battalion carrying fearsome weapons they would, in all likelihood, had not needed, even if the people had rioted, unless he was looking at a horrific and large scale massacre, or to “Exterminate the brutes!!”

Many Northerners told COCORIOKO that they were scared as well as offended, obviously, because President Bio behaved like a warlord going into hostile enemy territory, which the Northern Region is not. For all the hostilities, marginalization and sidelining the region has suffered from President Bio since he came to power in April this year,  not to mention the beatings and burning of houses of sons and daughters of the region, the North is just another normal and friendly part of Sierra Leone ready to work with him to build a better Sierra Leone. To them, the excessive show of military power was a strong message to Northerners that this government will not treat them with kid gloves even in the military sphere. “He promised to come and thank us for voting for him , but he came with an  intimidating  showoff of military power , ” Amara Turay, a resident of Makeni complained to COCORIOKO .  “His presence in Makeni was just a show of military strength but not to unite the nation. He came to Makeni like how Hitler entered Paris, to provoke and create more division within the country”, Peter Sesay remarked.

Did President Bio have to intimidate and put fear in Northerners to get them to receive the message that he did not consider them friendly allies ? What message was he actually sending across ? Should he not have adopted a more pacifying and unifying posture , considering that he was going there to also mend fences with Northerners ?

Some Sierra Leoneans reminded the former junta leader that he is not a junta president, however hard he tries to look like one,  and therefore his junta style of leadership is wholly unacceptable to the peace-loving populace of Sierra Leone . The war ended 16 years ago and Sierra Leoneans did not need that kind of macabre reminder .

To his credit however, once he got to the North, the whole thing changed. President Bio had  impressive rallies with the people of  Makeni and Magburaka during which he made some fascinating statements and promises about national unity and national cohesion and even broke grounds for a new hospital project.

However, President Bio left a bitter taste in the mouths of Northerners and this is not good for national reconciliation, national reintegration and national cohesion.