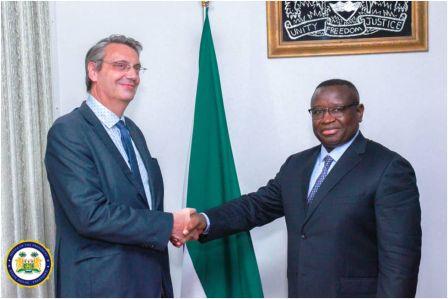 Ambassador Grosgurin said that he was happy to have travelled all the way from Guinea, where he resides, to not only strengthen the bilateral relationship between Sierra Leone and France, but to also discuss the future of the two countries, especially around key projects and investments.

The French envoy also stated that since the closure of their embassy in Freetown in 1996, past governments of Sierra Leone had considered opening a mission in Paris, the French capital that would help the two countries to do business easily. He added that he looked forward to seeing President Bio fulfil that dream of opening an Embassy in Paris.

In appreciation, the President expressed gratitude for the visit and described it as one that he had been looking forward to since he took up the office in April, adding that the two countries had come a long way.

“The two countries have been close for a long time in trade and investment and that has helped boost our economy, particularly the contributions of French companies in Sierra Leone like Orange SL, Bollore and Air France,” he noted.

He also told the French Ambassador that his government was committed to working with the people of France on economic diversification like marine resources, and trade and investment from very credible investors.

“We have to continually invest in trade and industry so that we can stop going out to beg from our brothers and sisters in other countries,” President Bio said.