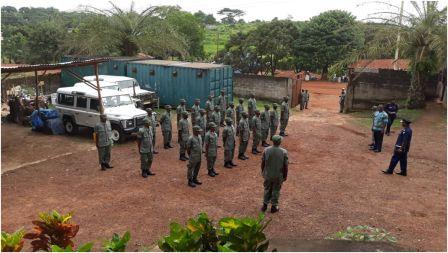 In an exclusive media coverage, Media One of the Sierra Leone Police (SLP) assured this Newspaper, all and sundry that the security status across the length and breadth of the country would remain substantially calm and would indicate no cause of alarm throughout the festive season. Day and night patrols will be robustly handled and keep going on to curb robbery activities, cliques/gangs and other criminalities throughout the season. To adequately substantiate the assurance, on Saturday 27th October, 2018, Freetown East and West jointly conducted raids at upper Moyeiba axis, Mountain Police Division where 27 suspects were arrested for various offences ranging from unlawful possession of offensive weapons to wit cutlass and unlawful possession of cannabis sativa. Among the suspects that were arrested, was a notorious gang leader, Mohamed Conteh AKA “Pop corn”, of Pipe Line, Lower Gloucester village. 13 of them were charged to court after proper vetting and exclusion.

In another successful encounter, SEM was intimated that on Wednesday 24th October 2018, the Operations Team Central Police Division conducted raids on Ghettos and grey areas at the back of Vice President’s office, IPAM and its environs. Ten male suspects were arrested, investigated and charged to court for various offences, ranging from loitering and unlawful possession of cannabis sativa. All suspects pleaded guilty and were remanded at the Male correctional Centre, Pademba Road. To effectuate pro activeness, acting upon a tip off, Mountain Police Division arrested 4 suspects in possession of 7 vehicle wind screens, 2 motor springs and a knife in a building at Matokoh, Calaba Town suspected to have been stolen or unlawfully obtained.

Furthermore, this medium was updated that the SLP is continuously monitoring the situation at Sahn Malen, following the impasse between local land owners and SOCFIN Company, 26 OSD Personnel have been deployed to maintain peace and order whilst the Regional Commander has been provided with additional standby personnel to augment those deployed. According to reliable information, the area is quiet and normal at present. Again, on the 27th October 2018, acting on a tip off, Police Officers in Makeni discovered 2 government vehicles (AIT 349 and AIT 350) and one XL Honda at No.144 Mayeiba Street Makeni. The two vehicles and one motorbike were suspected to have been stolen or unlawfully obtained from the Ministry of Agriculture, Forestry and Food Security (MAFS). Two suspects and exhibits were transferred to the CID Headquarters for further investigations.

In its quest to protect lives and properties, Police arrested 350 shotgun cartridges concealed in a jerry can at Madamaya checkpoint, Kambia on the 24th October 2018. The suspect was investigated, charged to court and sentenced to Two (2) months imprisonment. Exhibit was directed to be handed over to the Military for destruction. It was vigorously reported that on Wednesday 31st October 2018, at Mile 38 checkpoint, one Ibrahim Momoh Kallon was arrested with One Hundred and Thirty- Four (134) assorted Government’s “Free Quality Education” text books whilst travelling to Freetown onboard SLRTC Bus (AKU 013). Both exhibits and suspects were escorted to the CID Headquarters for further investigations.

Conclusively, this medium was accurately informed that the CID at Congo Cross is investigating an alleged case of murder which took place on Friday 26th October 2018 at Regent Road, Wilberforce involving one Mamadu Umaru Jalloh alias “ John Barb” formally of Wilberforce, who was stabbed on his chest by one Musu Dumbuya of Regent Road, Wilberforce, Freetown. He was rushed to the Emergency Hospital at Goderich where he was later pronounced dead. Suspect Musu Dumbuya is in Police custody helping with the investigation.

Minister Of Lands Vows To Put The...