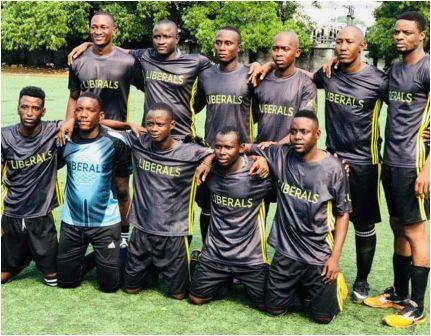 In what was described as a beautiful and competitive scene at the Sierra Leone Football Academy pitch, Kingtom, the tournament host was forced to work harder coming from behind to secure their all deserving victory.

Ibrahim Yusiuf Kamara put the enjoyers of Quimanora in front during the first segment but their lead only lasted for 60 minutes as Liberals incomer, Stanley Kamara level the score-line before Liberator Robert Koroma strike to give the tournament host, the all-important victory with his second goal of the tournament.

With the first finalist already in the book, the clash between Auradicals and Diaspora was another tight and entertaining encounter but goals from Samuel Smart and Chernor Bah were enough for Auradicals to dispose Diaspora and set up a mouthwatering finale.

Already Liberals Sierra Leone assistant coach, Daniel Conteh is looking forward to the said final and very optimistic his side will lift the title. “We had a scared against Quimanora during the first half which was a lesson to us and we cannot afford that in the final. We are going to work on the team before Sunday to produce the result we want as it is never going to be an easy match,” Coach Conteh said.

For the Auradicals coach, Sam Ansumana is hopeful his squad can continue their good run of form to lift the Liberals celebration title. He said: “So far my game plan is working well and I am looking forward to the final which is going to be a different ball game.”

Auradicals made it to the finals with a 2-1 win over Skullz and Diaspora with the same score-line while Liberals get passed Status Quo with a 4-0 win and 2-1 victory over Quimanora.