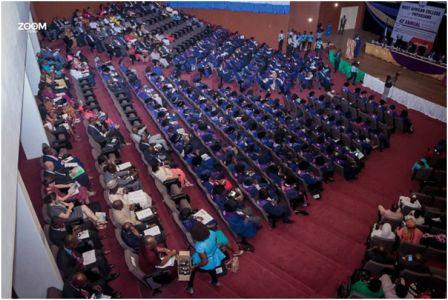 The 42nd Annual General and Scientific Congress of the West African College of Physicians (WACP) kicked off Monday, 5th November, 2018 at the Bintumani International Conference Center in Freetown, preoccupied with the challenges facing the region’s health laboratories and the emergence of ‘super bugs’- bacteria now resistant to antibiotics.  (Photo: The 42nd WACP Annual Congress brings together physicians from 12 member countries in West Africa, the largest gathering of Fellows and Member)

The main theme of the meeting: ‘Defining The Role Of The Laboratory In The Era of Emerging And Re-Emerging Diseases In The Sub-Region’ aims to remind West African countries of the importance of laboratories in the diagnosis and management of infectious diseases. The recent Ebola Virus Disease outbreak (2014-2016) in the region, especially the Mano River Union basin, exposed the inadequacies of laboratories in the affected countries which contributed to the prolonged duration of the epidemic.

The dreaded disease claimed the lives of more than 11,000 people and 500 health workers in five countries in West Africa- Liberia, Guinea, Sierra Leone, Nigeria and Mali; leaving in its trail thousands of survivors, including widows and orphans, who are in dire need of help.

“The indiscriminate use of antibiotics has led to the emergence of ‘super bugs’, bacteria now resistant to most antibiotics available. This is a serious challenge in the world but more so in our countries where the use of antibiotics is uncontrolled and where the cost of effective treatment of these superinfections is well beyond our means,” noted Prof. Lisk.

Countries of the sub-region face the challenge of combating substandard drugs smuggled into their jurisdictions and marketed far and wide by drug peddlers.

The five-days meeting (4th-8th November, 2018) brings together physicians from 12 member countries in West Africa, the largest gathering of Fellows and Members. The College has grown from its original five Anglophone chapters to its present 12 chapters, seven of which are Francophone.  According to Prof. Lisk, there is the possibility of an addition of a Lusophone chapter during the course of the meeting. Only two more countries in the sub-region are yet to join the family.

“We are expecting a successful meeting with lively debates and discussions and the passing of resolutions that will impact the direction of health policies in the sub-region,” said Prof. Lisk. Sierra Leone’s Vice President Dr. Mohamed Juldeh Jalloh and Minister of Health and Sanitation Dr. Alpha Wurie attended the opening ceremony on Monday morning. Giving the keynote address, the Vice President reiterated the Government’s commitment to the health sector by increasing the national health budget from 10% to 15% in 2019, a move to boost government’s ability to take charge of health funding.

The small mineral-rich West African country ironically has some of the worst health indicators, including the highest rates of maternal mortality at1,360 deaths/100,000 live births  and the highest rates of infant mortality at 66.73 Per 1,000 Births (CIA World Factbook). Out of every five children in Sierra Leone, one is likely to die before celebrating their fifth birthday (Unicef).

WACP (the College) was formally inaugurated in Lagos, Nigeria in October 1976 with the main function to organize professional specialists postgraduate medical training in West Africa, through formal courses, workshops, conferences, etc. The College also certifies specialists in six major medical disciplines through a program of examinations and accredits training institutions for conducting postgraduate medical training for Membership and Fellowship programs of the College. In addition, the College advises Governments of West Africa on relevant aspects of health and healthcare.

Since it was established, the College has trained 15 Sierra Leonean health specialists, and13 are currently pursuing various training programs.

The College recently granted the Ola During Children’s Hospital in Freetown a partial accreditation for training of pediatricians and the country’s main referral health facility, Connaught Hospital, for training in internal medicine.

Expressing his gratitude on behalf of the Government of Sierra Leone, Dr. Jalloh noted that young doctors now have the opportunity to do specialist post-graduate training in-country.

Sierra Leone has only one resident pediatrician, two pathologists, two psychiatrists and a potential resident in internal medicine at the Connaught Hospital.

This is the sixth time Sierra Leone is hosting the WACP annual meeting.