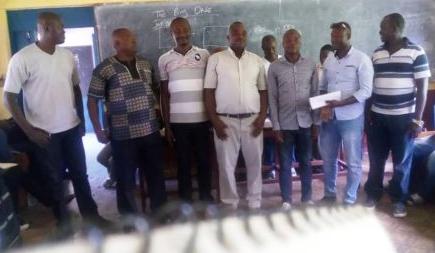 In exclusive media coverage by Sierra Express Media (SEM), the Academic Staff Association of the above mentioned tertiary institution conducted their elections and a new executive was formed on Wednesday, 17th October, 2018. The National Returning Officer for that sensational event is the Dean of Commercial Studies, Mr. Ibrahim Sorie Sesay with his astute team. The following nominees were duly voted;

The above newly elected executive will serve for the tenure of 2018, 2019 and 2020, until 17th October, 2020. Reverend Patrick assured his colleagues that with their utmost cooperation, the new team will achieve its projected targets and confidently promised to construct a rest room in the staff room, after he has pleaded to the Administration to effectively and efficiently work with them.

Thereafter, the Electoral Commissioner admonished the new executive with special preference of a collaborative team work in the best interest of the Association. During the swearing in ceremony, he carefully asked if anyone amongst them had the intention to write a petition as against the conduct of the whole electioneering process, to do so before that day ended for final endorsement. However, he thanked and appreciated the entire electoral process by unleashing admiration on the duly elected members on the aspects of performance and professionalism. In a quite exciting mood, he registered his commitment to formally present the newly elected executives to the Administration. In his closing statement, Commissioner Sesay appealed to his compatriots to reconcile the mistakes made by the out gone executives and keep the unity together.

The Secretary General updated that well attended ceremony that their welfare is at stake and that they are not fighting but establishing a common cause.  Reverend Vandi promised to deliver as a formidable team has been elected to manage the affairs of their colleagues. In a subtle manner, he urged moderate colleagues with salient contributions to put them forward for the betterment of all. “As we are quite aware of the request posed to us by the Deputy Minister of Technical and Higher Education, Dr. Turad Senessie to immediately form a five (5) man committee, geared towards launching the polytechnic. Be persistent in order to get what you want. Gentlemen, please let us be mindful of the fact that this is a new dispensation. As there is nothing in the coffers, we must ensure as a formidable staff body that this new leadership succeeds”.  Asserted the Secretary General.  The five man committee comprises the Chairman, Secretary General, a Deen of any faculty, HOD M. Kamara and the PRO, was immediately formed with the motive of having a meeting with the Deputy Minister in pursuance of their set objective.

The former Chairman of the Academic Staff Association, Bai Marro Kamara disclosed to this Medium in an interview that he inherited absolutely nothing from his predecessors. According to the GTI Engineering Services Business and Partnership Manager, the initial monthly subscription of Le 10,000 was increased to Le 15,000 during his tenure. “As a proactive leader, I facilitated the sum of Three Hundred Thousand Leones (Le 300,000.00) as soft loan to staff that should be paid in Two (2) equal installments with meager interest charged. My formidable team was running the Association smoothly when the suspicion of embezzlement erupted, believed to have ignited by few members out of malice.  Thereafter, a letter was written to me in 2015, demanding for a comprehensive financial update. Upon receiving such letter, I went to the Union Trust Bank and withdrew the outstanding balance of Le 22,000,000.00, which was generally opted to be shared”. He exclaimed. In his conclusion, he said most of his colleagues were not cooperating with him due to the fact that he was part of the Executive Management Board, been the Chairman.  Kamara made it crystal clear that his tenure has expired, but the electioneering process was not appropriately done as Educationists.

Subsequent updates will be posted by Sierra Express Media as they unfold.

ICT Utilization Is Pivotal In Heal...