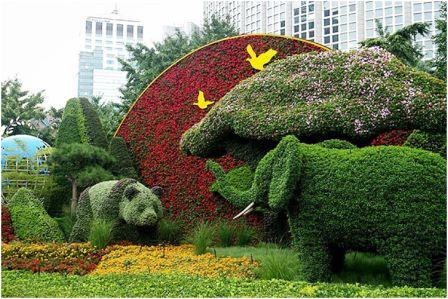 The Forum on China-Africa Cooperation, acting as a model for South-South cooperation since its establishment in 2000, will continue to be an important platform for jointly building a community of shared future for mankind, diplomats and researchers said.  (Photo: Sculptures of a giant panda and an African elephant are installed to mark the upcoming Forum on China-Africa Cooperation summit in Beijing, Aug 22, 2018.)

The third FOCAC Summit, to be held in Beijing from Sept 3 to 4, will have leaders from China and Africa gather to renew friendships and discuss partnerships under the theme of “China and Africa: Toward an Even Stronger Community with a Shared Future Through Win-win Cooperation”.

Sun Baohong, Chinese ambassador to Kenya, said the upcoming FOCAC Beijing Summit will mark a new stage in China-Africa ties as it will formulate the direction of future development, backed by traditional friendship between the two sides.

The summit will also help China-Africa cooperation develop in a more coordinated and balanced manner and further promote South-South collaboration as well.

Achene Boukhelfa, Algerian ambassador to China, said the traditional friendship between China and African countries has a long history and has always been based on mutual respect, mutual benefit, noninterference in internal affairs and win-win cooperation.

While calling for further cooperation in science and technology and infrastructure construction, Boukhelfa said that he is certain that both China and Africa “have a common future”.

Boukhelfa said that as of April 2017 the length of railways and highways built by China through aid and financing in Africa had both exceeded 5,000 kilometers.

Former vice-foreign minister He Yafei said the Belt and Road Initiative has won support and active participation from African countries.

China has signed memorandums of understanding with nine African countries on cooperation in Belt and Road construction including South Africa, Madagascar and Egypt, while over 20 other African countries are in talks with China concerning cooperative agreements, said the veteran diplomat.

He said the summit represents the success of win-win cooperation between different civilizations. The deepening China-Africa trade partnership will economically benefit both sides, and help safeguard and consolidate the rule-based international trade system with the World Trade Organization at its core, He added.

Africa needs infrastructure construction to realize regional connectivity so that the continent is able to become a model of cooperation in promoting the initiative, Jin said.

The past 18 years have witnessed the summit serving as a Sino-African mechanism of collective dialogue and pragmatic cooperation in such fields as politics, economics, international relations and security.