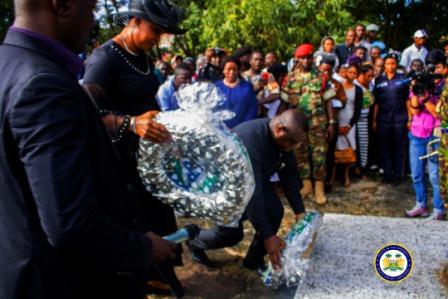 State House, Freetown, Tuesday 14 August 2018 – His Excellency President Julius Maada Bio has joined fellow Sierra Leoneans to observe the one-year commemoration ceremony for victims of the August 14 2017 mudslide and flooding at Mortomeh in the Regent Community, near Freetown.

The interfaith service, which took place at the St. Paul’s Catholic Church near the disaster area, was also attended by the Honourable Vice President, Dr Mohamed Juldeh Jalloh, Her Excellency the First Lady Mrs Fatima Bio, Cabinet Ministers, other stakeholders, survivors and families who lost their loved ones.

President Bio, while delivering his statement, said that on the back of memories of the civil war and the Ebola, the mudslide was another sad chapter in the history of the country as it claimed the lives of more than 500 Sierra Leoneans whilst over 8,000 others were sent to displaced camps during the raining season. He described the incident as a terrible tragedy, whose impact would not be forgotten so easily.

“Today, we remember all our brothers, sisters and children who lost their lives in this terrible tragedy. We all acknowledge the terrible pains, the trauma, the grief and deep sadness of all families and friends who lost loved ones in this terrible tragedy. Let us all keep the victims and their families in our thoughts and prayers and may the Good Lord prevent this country from such disasters,” he said.

President Bio also assured that his government, a God-fearing one, would continue to respond to the needs of the survivors as they coped on a daily basis to come to terms with the terrible loss, adding that as a way of remembering the victims of the tragedy, his government had decided to convert the tragic scene into a National Tourist Memorial Park for the reflection of all the victims of the disaster.

As part of his government’s proactive approach, President Bio stated that he had already set up an inter-agency mudslide committee, chaired by the Chief Minister Professor David John Francis, which through a transparent process of engagement with all the relevant stakeholders and affected communities had successfully completed the payment of financial incentive package of Le 8 Billion. The payment was to resettle families of the 86 houses in the demarcated Red Zone, provide humanitarian relief supplies to cater for their immediate needs as well as complete the orderly demolition of all 86 houses marked in the demarcated. He added that his government would continue to take more proactive measures to ensure that people were protected from future harm.

“This is not the time to apportion blame and responsibility as to whether this terrible tragedy was in fact a natural disaster that we had no control over or that it was a manmade disaster. As a proactive and responsive government, my cabinet has endorsed the establishment of a National Disaster Preparedness and Management Agency. As we are the third most vulnerable country in the world at risk to adverse climate change, we have to prepare ourselves with this,” he said.

The President ended by thanking all those who supported the country in diverse ways during and after the tragedy, especially the international partners and friends, the military and security agencies, the medical team and professionals, the media and the brave men and women who served as the first responders in supporting the affected communities.

This provides a great overview of mudslide safety (you have to scroll down a bit to see the article).

This article has great info for people who need to divert water away from their property – especially critical for those living in an area prone to mudslides.

This isn’t quite as comprehensive as the resource listed above, but  it’s worth sharing –  it’s formatted in a way it could be printed and hung up on the refrigerator for quick access and reference.

This is a great visual for exactly what to keep on hand in the event of a mudslide or any other disaster – Angie’s List says these supplies should be put together to sustain you for at least 72 hours.

After the Mudslide, Protecting Public Health

Although this seems to be written for first responders, this information on landslide-related health risks is critical for everyone to know. Who knew there were so many health hazards tied to these disasters?

This has a great section on landslides, among others on flooding, wildfires, and earthquakes. It was obviously written with Southern California residents in mind, but it’s great information for people at risk of any of these disasters no matter where they live.