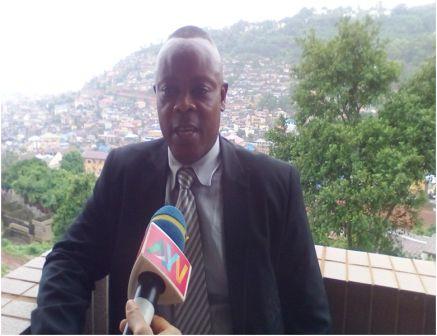 The Parliamentary Oversight Committee on Tourism and Cultural Affairs has on Thursday 19th July 2018, engaged three institutional developmental unit in the tourism industry including the Monument and Relics Commission, the Sierra Leone National Museum and the Sierra Leone National Railway Museum at the New Administrative Conference Hall at OAU Drive Tower Hill, in Freetown.

In his opening remarks Chairman Hon. Issac Tom Tucker (in photo) of Constituency 022 Kono district, as part of their mandates to conduct Oversight functions there by engaged to investigates, monitor, and supervise those institutions under his purview. Hon. Issac Tom Tucker in his opening remarks noted that; the purpose of the meeting was to strengthen the riche dynamic institutions among other things for tourist attraction and for the development of the country. He further elucidate the essence of the Committee to engage with its investigations and expressed purpose of identified with touristic areas that was key focus the Monument and Relax Commission among others for national development and to better understand and ascertain allegations or information as Committee to ensure social awareness responsibilities with both efforts to achieve and encourage them in good sprite for the development of tourism industrial particularly the Five Hundred Thousand dollars (USD 500,000) that been placed for the development of Bonthe district tourism and Museum project he concluded. In their contribution, the three dynamic riche Commissioner for the Monuments and Relics Commission (MRC) Ann Marie Kamara presented the commission’s annual progress report for 2017, mandate that; the Monuments and Relics Commission is the main statutory agency responsible for the protection and preservation of cultural heritage in Sierra Leone since 1946, which an ordinance was passed to provide for the preservation of Ancient, historical and built Monuments, Relics and other objects of Archaeological, Ethnographic, Historical or other scientific interests. She expressed challenges including fulfilling the work and mandate of the commission putting modalities in placed to showcase the country’s cultural assets both proclaimed and potential to the general public, the wider world as a means of rebranding Sierra. She went on to say that; in 2017, the commission faces huge challenge that the Monuments and Relics Commission owing to the fact that; some of the funds for the allocations of the MRC were only accessed at the end of the year that were used for the smooth operations of the secretariat and the implementation of some activities whilst the rest were preserved for 2018 respectively. The Sierra Leone National Museum Josephine Kargbo and representative from National Railway Museum also made their contribution that in 1947, an ordinance to provide for the preservation of ancient among other things was passed by an act of Parliament which the Sierra Leone National Museum mandate is to acquire, conserve, research, communicate and exhibit artifacts related to the history and cultures of Sierra Leone, for the purpose of posterity, study, education and enjoyment. She further inform some of the activities achieve including outreach programs, increase number of visitors to the Museum, several exhibitions of different nature were mounted to visitors both local and international among other things. She also expressed challenges including inadequate finance to the Museum, lack of drivers or alternative sources of supports, lack of conservation expertise and materials, transportation, insufficient number of employees among several others.

In their attempt to muzzle freedom...