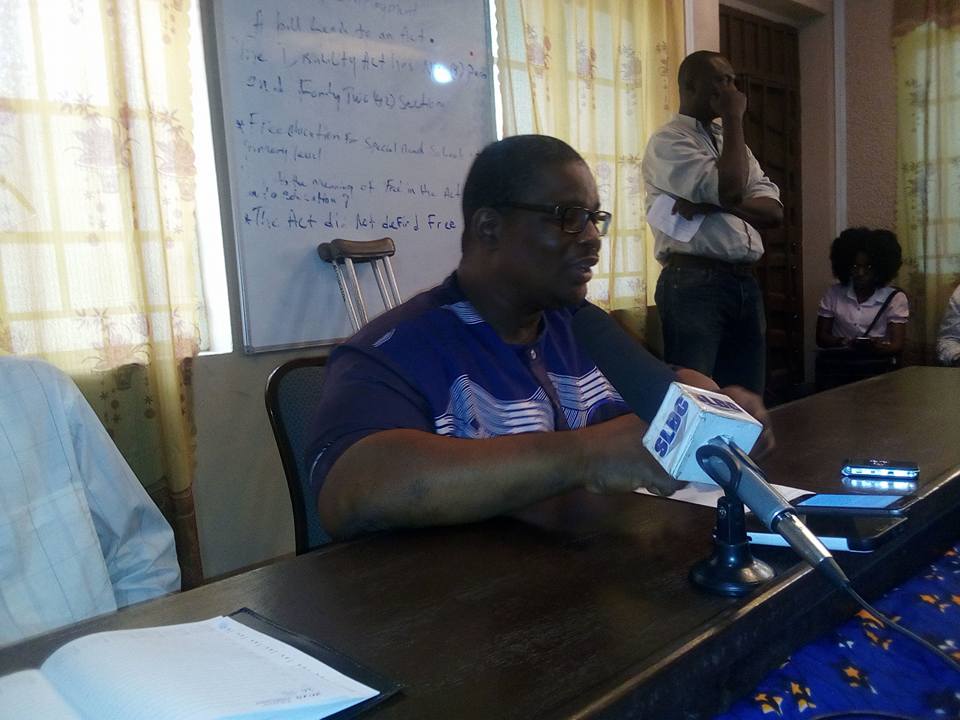 Media Watch Sierra Leone has on the 14th June 2018 Launched Network of Journalists on Disability issues at their new headquarter office, Fort Street in Freetown.

Media Watch Sierra Leone is a disability focused organization, established on the 5th August 2016 by Francis Ndanema and Khalilu Sillah, both have disabilities and have served as media practitioners for years and have acquired tertiary education in Community Development Studies and Linguistics respectively.

The organization was formed by Journalists to report on disability issues across the Country.

Dr. Alhaji Dumbuya who was the chairman of the occasion described Media Watch Sierra Leone as a network of Journalists from both electronic and print media to report on disability issues in the Country adding that their mandate is to advocate for disabilities across the Country.

According to Dr. Dumbuya, the Network have been working with the Ministry of Social Welfare Gender and Children Affairs, Handicap International, Pekin to Pekin Movement, National Commission For Person With Disability, One Family People, Action Aid and Sierra Leone Union on Disability Issues.

The Coordinator of Media Watch Sierra Leone, Francis Ndanema stated that the organization is presently getting support from One Family People to improve on advocacy and to promote the need to improve on disability issues.

Advocating for Free Health Care for PWD’s as provided in section 17(1) of the person with disability act of 2011 is one of our major activities., said the Coordinator and highlighted that and recalled the visit they paid to the former Chief Medical Officer (CMO), Dr. Brima Kargbo to write and instruct all medical superintendents and district medical officers to provide FHC services for all people living with disabilities”.

Ndanema explained that, staff at the Connaught hospital not aware of the provision in the FHC, alleging that nurses are demanding payments from PWD’s.

‘’Last year, Ndanema said they participated in the Blood Donation Week organized by Focus 1000 in collaboration with the Ministry of Health and Sanitation (MOHS) and Media Watch to donate blood and save lives’’.

Ndanema ended by stating that the Media Watch Network is facing has an office space and equipment challenge, donor support for long term projects, mobility and lack of funds to extend their operations nationwide.

He said most of their projects are funded and implemented by themselves and expressed thankfulness to the One Family People for bestowing confidence in them and given them the necessary support.

In His statement, The Deputy Minister of Information and Communications maintained that PWD’s are the most vulnerable sector in society and assured his ministry’s commitment to always come to the aid of the organization when the need arises. He officially launched the Network of Journalists on Disability Issues.