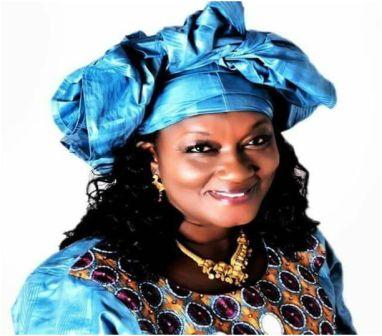 Madam Haddijatou Jallow (in photo), the out-going Boss of the Environment Protection Agency, on Friday 8th June 2018, officially bade farewell to her staff and handed over to the institution newly appointed and approved Chairperson, Dr. Foday M. Jaward at their Old Railway Line Office in Brookfields.

Speaking at the handing over ceremony, Madam Jallow expressed gratitude to former President Koroma for the trust, honor and privilege given her to lead the agency. She further expressed appreciation to the various development partners for their cooperation over the years in making her tenure a successful one. She singled out partners like the UNDP, EU and the World Bank, whilst commending the collaboration of other international and national bodies, including NGOs. She praised their contribution to the implementation of the agencies programs. Her biggest thanks went to her staff, whom she said touched her life in the course of their interactions.

She had special appreciation for all the heads of the various departments in the agency for facing the challenges together during her term in office. She told the new Chairperson of the institution that the staff are committed, tenacious and have sacrificed their time in the course of duty and have been professional in the performance of their job. She stressed that transparency and accountability have been the watch word of the agency, as have been seen over the years.

She had warm words for her successor, describing him as an eminently qualified individual and one who is passionate about the environment. She called on the workers to give their new boss all the support they gave her and is optimistic that he will lift the institution to a much higher height than what she has achieved. She called on the new boss to exercise patience in dealing with the staff as they can be trusted to deliver the goods.

Responding to the handing over statement delivered by the outgoing Chairperson, Dr. Foday M. Jaward, the new Chairperson of EPA said that he is very passionate about the environment and that it is his baby.

He went on to say that when in USA he work on the environment and was happy to answer to the call of His Excellency, President Bio to come to Sierra Leone, his native land and contribute to the development envisaged in the New Direction manifesto. He promised to provide the leadership to actualize the dream of the president. He assured his predecessor that he is committed to make the necessary change in the environment whilst recognizing that the task ahead is no mean one but one full of challenges. In this regard, he hopes to take a holistic approach to addressing them. He mentioned the challenges which face the environment, of which mining is one and promised to maintain a safe environment where work can go on.

Dr. Jaward further explained that his administration will put emphasis on discipline and that his principal objective will be to inspire the workers to contribute to the firm commitment of President Bio to turn the destiny of the country to a prosperous one. To the outgoing Chairperson of the EPA, Dr. Jaward said that change is part of life and it is left to us to make the best of the situation. He wished her well in her future endeavors, stressing that he will always consider her to be part of the EPA family. He promised to work with all the workers of the agency and asked them to be open, accommodating and cooperative. His door is open to them and expects a cordial relationship with all workers.

He however maintained that the expectations from the public are high and called on all to put their shoulder to the wheel and contribute to making a better Sierra Leone for all.

The ceremony was climaxed with the handing over of all relevant documents of the Agency to the new Chairperson by the outgoing EPA Chairperson, amidst cheers in an emotionally charged meeting.