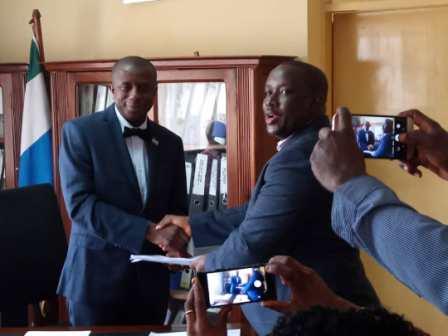 “The bonds that bind us together should be greater than those that divide us.”  These were the exact words of the  newly appointed Chairman of the National Commission for Privatisation, Umaru Napoleon Koroma as he received a detailed handing-over report from his predecessor, Sulaiman Kabba Koroma earlier today at the Commission’s Conference Room, Lotto Building, Tower Hill.

Earlier, the outgone NCP Chairman extolled the virtues of Mr. Napoleon Koroma describing the latter as a disciplined and result oriented individual. “I believe the President did not make any mistake to appoint someone like him and I definitely believe he can perform.”

Mr. Sulaiman Kabba Koroma also advised the new Chairman to always take cognisance of the legality of any action or policy he wishes to implement as according to him,  this has been a major reason for his successful tenure at the commission. He made specific reference to the NCP Act which gives the institution greater powers to directly supervise the affairs of Public Enterprises under it’s purview.

Responding, Mr Napoleon Koroma expressed gratitude to HE President Julius Maada Bio for the confidence he has reposed in him.  He expressed gratitude to the outgone Chairman and pledged to religiously go through the report handed over to him as a sure way of learning the intricacies in the Commission. “It is reassuring to have someone from the political divide taking his time to formally hand over or give account of his stewardship in a very important institution like the NCP. This, by all indication is a strong testament to our growing democratic culture and political tolerance,” he maintained.