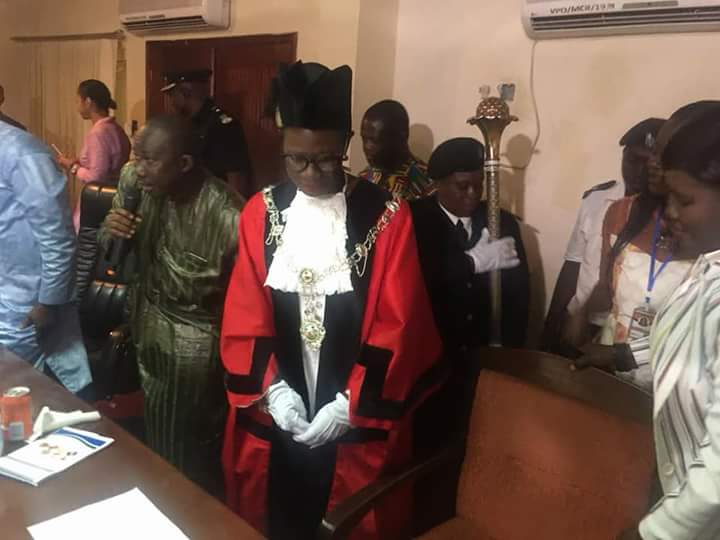 Various civil societies and opposition parties have expressed dismay over the physical and verbal attack on Freetown’s elected Mayor, Madam Yvonne Aki-Sawyerr, by hooligans of the ruling Sierra Leone people’s party (SLPP). Many Civil Societies including Campaign for Good Governance (CGG), Women in the Media (WIMSAL) among many others have put out press releases condemning such act of violence and recklessness.

Very anxious supporters of the All People’s Congress (APC) party yesterday evening urged the leadership of the ruling Sierra Leone People’s (SLPP) party to reign in on their overzealous and riotous supporters to stop “playing with fire” on hate speech and unprovoked violence.

They were reacting to the attack on the Mayor of Freetown municipality, Yvonne Aki-Sawyerr yesterday May 23rd by irate and rowdy supporters of the ruling SLPP.

In a brief discussion with Mayor Yvonne Aki-Sawyer last night, she described her ordeal as traumatic but however maintained that God remains in control. She assured that she will be Mayor for all Freetonians despite the verbal and physical attacks against her.

“In a democracy, everyone must acknowledge the scope and limitations of their rights and responsibilities. We therefore encourage the SLPP leadership to reconsider their plans to destabilize this country and focus on governance,” the Spokesman of the main opposition party, Cornelius Deveaux said on Wednesday evening.

He also stated that the APC was deeply concerned about unnecessary tensions and hate speech which have the propensity to undermine the hard won peace and stability the country has enjoyed since 2002.

It would be recalled that scores of APC supporters and sympathizers were attacked and in some cases chased out of their homes in the South/East of the country following the announcement of the March run-off polls which regrettably declared Julius Maada Bio of the main opposition as winner.

Although the run-off election was widely hailed by international observers as relatively peaceful, the wave of political violence which came less than twenty-four hours following the official announcement of the presidential run-off election results was uncalled for.

In Freetown and Kenema specifically, supporters of Julius Maada Bio, took the law into their own hands when they attacked and destroyed hundreds of makeshift market stalls used by street traders. The destruction of the street traders’ market stalls was roundly condemned by many  except for the Standing together for Democracy Consortium which was so vociferous before and during the polls.

In Kono district, also in the eastern region of the country, APC party supporters were chased out of their houses.

According to eyewitness accounts, residents, mostly Northerners, were chased out of their settlement in diamond rich Kono district. They fled 40 kilometers North to Masimgbi in Tonkolili district.

BBC stringer Umaru Fofanah reported that the Local Paramount chief Bai Kuru Kanagbaro Sanka described the scene as reminiscent of the rebel war years. “Seeing people entering the town en masse reminds me of the past war when RUF rebels attacked Kono. It’s the same. Some have been tortured, abused, and some have lost valuables.”

Alpha Kamara, a journalist, reported that, “A woman was injured with a machete on her breast. Another says she was undressed in public and abused. Others have different painful stories. All of them said they are opposition APC party supporters and were targeted by rowdy youths of the ruling SLPP.”

“There have been sustained attacks on opposition party supporters since incumbent President Julius Maada Bio was declared president elect,” Kamara reported. Bio, who assumed office on 4th April, has condemned the violence although rather belatedly.

“If there is anything to take away from the (March 2018) elections, it is heart wrenching that our politicians have allowed TRIBALISM to rear its ugly head in our midst,” said Abdulai Mansaray in his article “Tribalism: The Idolatry Of 20th Century” published on 17th March, 2018 in Sierra Express Media online.

No matter what this president can deliver stability but he cannot deliver prosperity. So he has to take a position and prioritize as quickly as possible. If he wants stability this madness must stop. We’re disgusted with this nonsense which is clearly supposed to distract us from the recent diamond which turned into stone in the custody of the current Vice President Mohamed Juldeh Jalloh, but we won’t play along. We only hope that the SLPP will stop playing with fire because fire eventually consumes everything in its path.