Cleaning is Right but Businesses Distracted 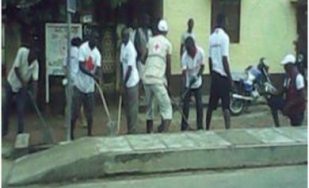 Cleaning is Right but Businesses Distracted

Citizens welcomed the Saturday cleaning exercise but the extension of time from 12:00 noon to 4: 00pm absolutely frustrated Sierra Leoneans for the fact that programs and businesses were distracted.

Some Muslim worshippers in the eastern part of Freetown where garbage took over various streets and junctions complained that time extension was not in their favour as preparations were in place to organize marriage ceremonies in various places ahead of the holy month of Ramadan (Fasting), expected to start middle of this month.

According to people who spoke to this medium, they are not against President Bio’s initiative to bring back the Saturday cleaning but, they were anticipating it to end at the original scheduled time.

Sierra Leoneans say, the reintroduction of the monthly cleaning was an idea initiated by the then military rule of the National Provisional Ruling Council (NPRC), in which President Bio was part and parcel.

“So if he decided to bring the cleaning back as the current democratically elected President of this republic to promote health and sanitation, we have no option but we want it to be done within the ambit of the law”, citizens bemoaned.

In that regard, residents of Freetown municipality have queried the Minister designate of Lands Country Planning and the Environment, Dr. Dennis Sandy to apologize for unconstitutionally extending the cleaning to four hours.

The cleaning day which started at dawn must end 12:00 noon to allow the public go about their normal businesses.

Some have weddings to attend, other scheduled programs are many, but Dr. Sandy’s Ministerial Order No. 1 has since been condemned by many Sierra Leoneans residing in Freetown. A good number of citizens are calling on Parliament not to confirm such a character as minister and called on President Bio to apologize for appointing such a power hungry person to occupy public office.

As garbage takes over Freetown Pas...

As Democracy Dies In Sierra Leone...