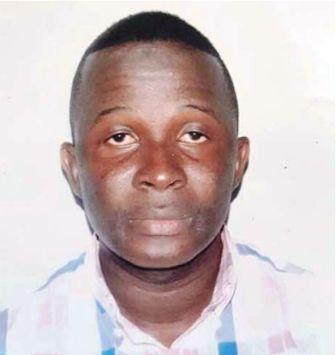 Sheku Tarawally, a strong member of the All Peoples Congress in Kono, is presently on the run looking for safer haven.  (Photo: Sheku Tarawally a victim of political intimidation?)

Tarawally who before this time was a member of the APC Campaign Team in Kono is said to have gone into hiding knowing fully well that irate youths of the ruling SLPP are looking for him and members of his family who they deem to be strong sympathizers and members of the APC.

Political Intimidation is presently rife in Sierra Leone following the pronouncement of the recent Presidential result that saw the then Opposition Party Presidential candidate, Retired Brigadier Julius Maada Bio clinching the power as against Dr. Samura Kamara of the All Peoples Congress.

Sheku Tarawally, a Temne by tribe who hails from Kono District in the East End of Sierra Leone is said to have travelled outside Sierra Leone after the first round defeat of the APC by the SLPP in the March 7, 2018 elections.

His decision to go into hiding, according to family sources, has left many of his relatives in constant fear as they are worried on the grounds of his safety even though they too had suffered political intimidation in Kono that led them to seek refuge in Massimgbi, within the Northern District of Sierra Leone. According to investigation, the APC strongman has been targeted by enraged SLPP youths who before this time had threaten to unleash violence and political intimidation on all APC members they deem are a threat to the existence of the SLPP in Kono District.

The APC party between 2007 -2012 had taken over Kono District polling many votes while the SLPP has lost many votes considering the fact that Kono before 2007 was considered to be a stronghold of the SLPP.

Tarawally’s family has therefore been subjected to heavy political intimidation that has resulted to the death of his cousin in the person of one Mohamed Kamara who was physically beaten by unknown SLPP thugs in Kono.He was admitted in hospital and died in the hands of Sheku Tarawally.  This incident is reported to have happened few weeks to the election. The APC which was the party in power had lost control of the security forces and the Judiciary which is supposed to dispense justice in such a situation.

In February 11th this year, Tarawally was attacked, beaten and have his personal phones and monies taken from him by desperate SLPP supporters.

His cousin Mohamed Kamara suffered a similar fate that led to his untimely death. This later resulted to another attack on Tarawally’s house in his absence on the day the results was announced.