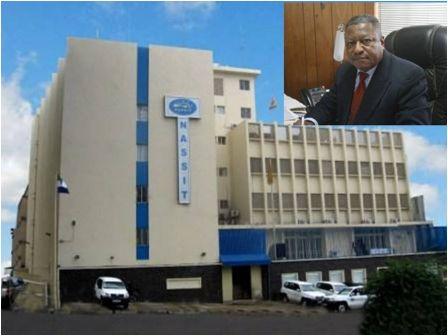 As news about the Le221 Billion, alleged to have been given to the APC government by NASSIT from the pensioners Benefit Fund, continue to saturate the social media, the management of the institution has now set the records straight.

Senior officials from NASSIT say that the whole information is false and is calculated to cause mischief.

The said amount is the amount owed by the Government of Sierra Leone (the highest employer in the country) on behalf of its workers (15% monthly NASSIT contributions) since 2016 which it had not been paying regularly.

During our investigations at the institution, it was disclosed that the amount of Le221 billion, alleged to have been dished out to the government for elections purpose is false.

One senior official explained that the Government of Sierra Leone is the largest contributor to the scheme because it is the highest employer and by the NASSIT Act, an employer should pay 10% plus 5% deducted from the worker’s salary to a pension scheme at NASSIT on a monthly basis.

This in effect means that a total of 15% should be paid monthly to NASSIT on behalf of every employee in the employ of government.

The government, it was learnt, has been meeting with its obligation to its workers by paying their NASSIT contributions every month, but sometime in April 2016, it stopped making regular payments and as a result arrears began.

Since the contributions were not being paid regularly, the arrears grew. The total amount of the arrears is said to be Le219 Billion and not Le221Billion as peddled on the social media.

It was also disclosed that several engagements were made with the government on the issue, including correspondents and meetings, of which the present Financial Secretary of the present government was a party and is au fait with the details of such meetings and correspondences.

Officials at NASSIT say that under normal circumstances, if it were a company or an institution, they would be taken to court to recover the outstanding arrears, but it is impossible to do so with the government, as a result they went into negotiations with them.

It was also disclosed that the said amount does not imply that the government had not since 2016 paid anything to NASSIT, but rather, had done so irregularly, hence the huge amount involved.

Sources at NASSIT say that they have engaged the new government of President Julius Maada Bio on the issue and his government had shown understanding and is prepared to settle the arrears owed by the past government, but will do so according to a payment plan agreed upon, wherein government will be paying part of the arrears together with the monthly contributions for its numerous workers.

This process is expected to start this week and will not be a one off payment, but will be done in bits, as it pays its monthly contributions for its workers, until the arrears are all cleared.

Senior officials contacted say that the monies they deal with are the people’s money and they have not in any case, given any amount to any government, but have been investing it in profitable ventures like in the financial market (buying treasury bills and bonds) which will bring benefits to the scheme.

It was also learnt that NASSIT has a reserve of Le1.4 Trillion and is ready to pay every pensioner at any time.