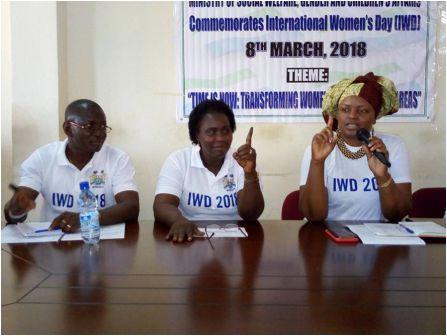 The Minister of Social Welfare, Gender and Children’s Affairs Isata Kabia has launched the Village Savings and Loan Scheme project in order to build the financial capacity of women in rural communities.

The launching ceremony was done during the commemoration of International Women’s Day IWD March 8th 2018, at the ministry conference hall New England Ville in Freetown.

Launching the project Madam Kabia describes the scheme as a village bank owned exclusively by the villagers. She explained that the scheme is a partnership between the ministry and the women of Sierra Leone. The aim of the project she said, is to help transform the lives of rural women and to encourage them to save their money for feature purposes. She maintained that the scheme is very helpful and if the women put seriousness to it they will reap it benefit. “I once introduce this scheme when I was serving as Member of Parliament in Lunsar and it was successful and helpful” she said, adding that her aim was to ensure that she introduce the scheme across the country. Explaining how the scheme is operated the Welfare Minister disclosed that they have brought together 150 women who will separate themselves into five groups. Each group she said, will comprise of 30 women who will come together and choose a particular amount they will contribute weekly into a giant metallic box given to them by the ministry, the money will be saved for feature purposes. She stated that when the money will have reached a particular amount members will have the chance to loan themselves without interest when they are in dire need. To ensure the safety of the money she said, three locks will be provide for the box and the keys will be kept by three members of the group and the box is also being kept by another members, which will make it impossible for members to tampered with.

Minister Kabia revealed that she is going to put Le1000,000 (one million leones) in each of the boxes as a startup and encouraged the various groups to continue from there. She assured that if the groups properly managed the affairs of the scheme it will give the ministry the zeal to include more women in the scheme so that more women will benefit from it. She encouraged the women to take the scheme seriously as whatever little they saved in that box will be in their benefit.

Coordinator of the scheme Sheku Kanu explained that the village saving and loan scheme is established purely to encourage women to learn the culture of saving. He maintained that the project caters for women who are involved in small scale businesses; they will have the opportunity to save a particular amount weekly. He stated that this scheme will enable economic empowerment of women and will give them the chance to be self-reliant. He encourages the immediate beneficiaries to be proactive as the success of the scheme lies squarely in their hands.