Blinking in the dark at the creaking of a rusty gate 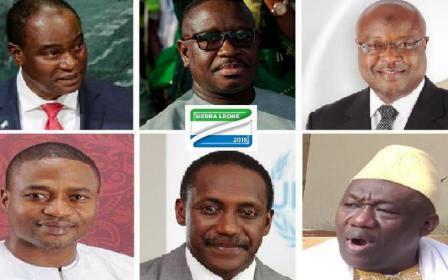 Blinking in the dark at the creaking of a rusty gate

Sierra Leone’s saving grace is that God, who is cooking our communal soup, has not left the kitchen.

Believe me, it does not matter who emerges as president in next week’s elections, we are in for a long ride.  This is because as long as we produce leaders that we make stronger than our institutions, because of stomach infrastructures, we will never make progress.

There is no gainsaying the fact that Sierra Leone with its fundamentally indecent value system, is at a major crossroad. It is one organism that needs a blood infusion not just a transfusion. If we look at the levels we have progressively moved in the past few years, it has been negative.

And yet, amidst our socio-political and economic crisis, we continue to allow ourselves to be manipulated; relegating to the side-lines, the outcry for a fundamental and holistic approach to the wearisome cycle of the masses’ trauma in what is simply an updated rendition of the same clipping – albeit with a change of cast here and there.

One word: MORALITY – that is, the shared values of the positive kind, lived, not just espoused, at least by the vast majority, is the very first step to any revival of a nation that has been bankrupt by a combination of intolerance and sectional dominance, greed, tribalism, indiscipline, corruption, impunity, nepotism, bribery as well as the pervasive myopic mentality manifesting in and out of our governance, systems and society and which is undoubtedly reproduced in the media, with the same alibis and the same in-built panacea of blame-passing like Samura Kamara did in the television debate.

Without morality, the flaws which have continued unabated and which led to our fratricidal war and is still very much a component of the gamut of national life, you can’t have the kind of society we yearn for.

To reinstate morality, you need overwhelming energy input. Listen, even if you bring all the egg heads from MIT, Harvard and Cambridge, they’ll all leave with their tails in-between their legs in our current climate. This is why, with just a little over a week to go and it is virtually daytime for us, we are all still in the dark.

Desperation is taking precedence over our national affliction. There is a huge trust deficit because of the ordinary man’s experience of politicians. We have gone hermaphroditic.

But does it matter if one slept on the deck, or occupied the Presidential Suite in a Titanic?

Are not everyone on board going down? Are not we all going to be fish meal at the end of the day?

Is it not better to save the vessel- in this case, the nation – than compete for better occupancy?

Let this be called to our collective memory. We are where we are in this age and time because we continue to repeat old, destructive patterns, thinking that is where the light is.  The bursting of a sty is usually meant to be the beginning of relief. Think Rwanda.

But in our case, the populace at large has adapted en-masse, not only to the corruption at the top and so creating an ever deepening mire; but they have also simply resorted to their age-long traits of ethnic, religious and sentimental perceptions and support. Emblematic of a wider staleness in our despairing politics.

Laudable as it was, the television drama for the bald men fighting for our national comb of leadership, ended up exposing the great divide in our political understanding and indeed, the puzzle of what exactly we want as a nation and the kind of leadership needed.

Which is why after the glamour of the much-advertised comedy, post-event analysis, especially by self-centred internal forces, have come up with varied conclusion of who won the debate.  In this regard, the whole concept of synergy needed to spur the desire for a different approach to governance is lost and we are back to square one. How will it help to fashion the way for a new nation?

One of the most baffling developments in the political process so far, is the high decibel mumbo-jumbo called change which has been made a mantra by those promising to shoot the golden arrow at the very heart of our apple.

If most of the proponents gave up on their parties and former fellow travellers which is just a minute microscope of our society, but now want to create a new thing (nation) that would deliver us from the hands of our enemies, from where cometh this sudden vision and impetus? We need to know.

Honestly, anyone who has not suffered Deja-vu because of that smooth-as-sandpaper and non-ideologically-driven, outraging and meaningless catchphrase called change, must be suffering from temporary amnesia;  because it underpinned the scam on which Ernest Koroma rode to power over ten years ago.

For decades, we have looked only one way — at factors, legacies and predatory tactics of our political leaders and structures, among others — to explain the miserable performance of our governance which has ensured the continuation of the pervasive rot and the largely recycling of old and stale wine in a new bottle. `Either way, it reflects expectations of a continuation of the rot, doesn’t it?

It’s said that: you cannot escape the responsibility of tomorrow, by evading it today. You need a wholesome environment sociologically, and that’s what’s lacking. There’s a bit of all or nothing about environmental milieus. You can’t plant beans on patchy soil, can you?

The citizens make the nation. A lesson the change brigade needs to learn pronto. The people make the structure and not vice versa.

Our past looks rosy despite being distant memory for some and history in technicolour for others. The present, with its creeping decline, is so ugly that it is not even the coldest of comforts to underline the high watermarks of that glorious times past; while the soil of the bleak future staring us in the face is so bad, that I cannot see any seed thriving on it, unless our entire society is fallowed.

The debate we should be having as a nation is that of what is more important to us.  I do not believe it is an acrobatic political rascality such as the recent paradoxical presidential razzmatazz which merely ended up revealing nothing but the shallowness of our collective aspirations.

We must grasp the key and insert it firmly to open the way to a much greater future. We need to celebrate the picture of that future into which me must move. And let’s recast the picture to make it ever good enough for our steps to be unwavering. Even the masses are gradually coming to the realization that it’s not that dogs don’t actually prefer meat, but that no one has ever given them. And that if we watch our pot, our food will not burn.

Unfortunately, every of our actions seem as if we are cursed to do the worst to ourselves.

Our very political culture which is crying out for a revamp, has ended up causing the nation severe pains and profuse bleeding; while the traumatised citizens are left more confused and bewildered by the chaotic and murky electoral process that is more a lamentation than a pathway to a more progressive nation.

Theatre of the Absurd is where every actor is expected to play the frontal role. Aided by political yahoo backers on social media, the electoral climate is being manipulated and muddled in favour of the democratic ambitions of candidates who are a recurring motif of the institutionalised blunders that got us to where we are.

Talking at all about a desire for a better society, is part and parcel of politics. However, joining like-minds to effect that aspiration by creating a critical mass for that wish, is no doubt a positive development that we cannot truly say exists in the current climate.

I have always believed that change will happen in spite of us, not because of us or the egoist and ideologically bankrupt political class whose promises always fall short and whose lack of moral leadership destroys the poisonous moonshine that they always peddle like a snake-oil salesman.

In spite of the current political pimping therefore, change will occur simply because when the potential of hydrogen of the soil is tending towards zero (that is acidic), the pedigree of the seedlings is irrelevant.

However, unless there is a unity of purpose, what the splinter parties and the off-shoots of the old brigades emerging as champions of the fight for a new Sierra Leone are going to end up doing after March 7th is to further entrench the goal, most certainly, of ethnic power, and creating political silos, which will finally subdue the momentum of the very project of change that is being espoused.

Similarly, the inability to get a co-ordinated approach, no matter the defects of the current effort at getting rid of the cankerworms that have debilitated our nations for so long, will simply help the ruling party to manipulate and contain the progressive forces and political development as well as stifle the very pragmatic realisation of the necessity that has tickled the fancy of majority of the people.

Again, while activists and the elite populace recognise that the stake is higher than the tragedy of an APC or SLPP return and despite the hanker for a revolution of some sort, our people aren’t ready. So how do you change the unit Sierra Leone, which is now like a woolly jumper washed too many times and pulled too often into shape. And that is a fact.

Yes, the people dance behind their ‘preferred’ choice and shout hosanna; but definitely it is just a rehash of what has always happened in previous elections and we know where that has gotten us.

Despite the fading glow of the ancient lust of independence, the issue is the people’s mind-set and the pervasive and highly normalised immorality of the citizenry, from where our leaders emerge.

Without the restoration of morality on the scale of 80% (in our case 95%), change will always be tough and excruciatingly slow-going; with a better than fair chance of getting worse. Much worse at an accelerating rate too, as a result of the fatal and grotesque inequality that permeates the masses.

Economist Vilfredo Pareto specifies that 80% of consequences stem from 20% of the causes, resetting our mind-set, especially through dialogue, is looking like an insoluble problem because our corrosion seems to have gone self-perpetuating.

In addition, our politics, where parties are merely a means to power and wealth; and actors are propelled neither by ideology nor principle, is a cardinal clog in the hope that our system will correct itself.

Another fact is that in a completely corroded environment like ours, where the corrosion agents are fully in charge, the only effective solution to our socio-political situation therefore has to be bottom up. The top is beyond rotten. So top down solution is, and has been, a monumental continual failure.

As we watch the chaotic and manipulative political ensemble in the countdown to March 7 and feel our hearts filling with the soft and secret colours of true change, found only in the deep recess of our dreams, I can smell the fear of reset thickening.

If Voting changed anything, they’d...