As He Commission over Le40M worth of Bridge 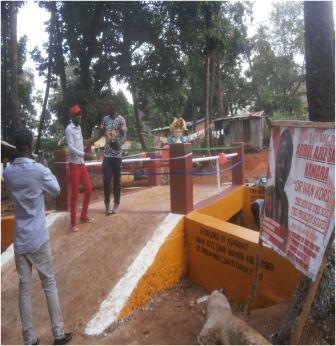 As He Commission over Le40M worth of Bridge

One of the renowned Sierra Leonean philanthropists, Abdul Aziz Sahid Kamara who is eyeing Constituency 121 Parliamentary symbol under the All Peoples Congress (APC) umbrella has commissioned a bridge which connects Moyiba and Ashobi Corner worth over forty million Leones (Le40M).

The handover ceremony which attracted supporters of the APC, religious leaders, traditional heads and members of the Abdul Aziz Islamic Foundation for the Poor and Needy and the general public was held at the Coconut Farm community where the powerful bridge located on Sunday 26th November 2017.

Performing opening prayer, Sheikh Marouf Kaloko described the bridge construction as a good work in Islam and has rescued thousands of lives especially school going children who find it very difficult to cross during the height of the raining season as a result of the vulnerable former state of the bridge.

Chairman of the meeting, Mohamed Mange Sesay said the motive of the meeting was to support Abdul Aziz Sahid Kamara and the APC generally but specifically to witness the history making commissioning ceremony of the community bridge which has been neglected by both past and present Members of Parliament and Councilors adding that, it is not a surprise for the community because the Parliamentary aspirant is a born and bred son of Black Hall Road Community.

He described the Honorable in waiting as a religious and social activist who always initiates development and emphasized that when he went to the United States of America, he always remember his background which he demonstrated by distributing carpets in various mosques and supplying of text books among students through the Abdul Aziz Islamic Foundation for the Poor and Needy.

He said the young man formed the foundation not to enrich himself but to help the helpless and recalled that a twelve years old child died in the then deplorable bridge.

The campaign Manager for the MP to be, Abdul M. Kamara said he is following Mr. Aziz Kamara because he has a genuine intention to develop the community and assured the gathering that he has the potential to do more with or without symbol.

Representative of the sitting MP, HON. JK Smith said all of them are one family in the APC and spoke on the important to place the success of the party first. He said he was happy to celebrate because the bridge was constructed by an APC person.

In his brief statement, the hopeful Parliamentary aspirant Aziz Sahid Kamara described himself as a new messenger that come to redeem his people and emphasized on the sadness in the faces of electorates. He said the new commissioned bridge will help children to cross safely in to their various schools. He stated that the bridge construction project is just the beginning and vowed to do more with or without symbol and described the ceremony as a celebration moment. He concluded by calling the community people to support him as a developmentally oriented citizen.

Ahead of Elections Internal Affair...