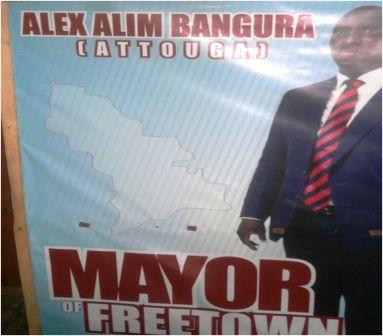 Many Sierra Leoneans are worried as to why popular and influential politicians in the All Peoples Congress (APC) party are giving way to less experienced politician like the Presidential Guard, Alex Alim Bangura (Attouga) with low admiration declaring intention to be the next Mayor of Freetown instead of allowing more competent people to take centre stage and join President Koroma in the new city when he would have relinquished power.

Citizens want to see competent people with humanitarian thoughts to aspire for the envious position but all of a sudden people very close to the President with poor political backgrounds shamelessly and fearlessly declaring to either be next President or Mayor.

Recently, the former Deputy Minister of Education Science and Technology (MEST), Mamoud Tarawallie who was sacked from his millions worth job as a result of allegation of rape is seen posting banners everywhere shamelessly bearing inscriptions like ‘Mamoud Tarawallie’ for President instead of quitting the race and allow people with clean records to come forward.

Sierra Leoneans identified Mamoud Tarawallie as one of the sons of President Koroma for the fact that he was reappointed as Deputy Minister of Lands Country Planning and the Environment after the court ruled in his favor.

It is the same antique ideology the Presidential Guard, Alex Alim Bangura is trying to portray even though he quiet understand that well established and popular politicians such as the mentioned Man of God above and others have showed up for the said public office for the second time.

The awarding of symbol for Mayor should not be done base on sentiment or familiarity but it should be given to deserving people so that the history of former Mayor, Herbert George Williams who was the first public official in the Ernest Bai Koroma led APC Government to be tried by the Anti-Corruption Commission (ACC) for alleged misappropriation of public funds may not repeat.

The attention of the Chairman and Leader of the APC, President Ernest Bai Koroma and other decision makers to be very careful in awarding symbol to popular aspirants with ability to influence other people so that the party will continue to maintaining its integrity.

We will not ban Social Media Assur...