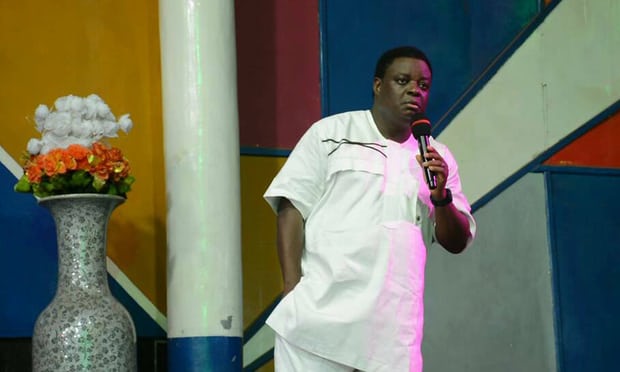 Assalamualaikum! Peace be with you fellow Sierra Leoneans. I am a Muslim and I love my Christian brothers and sisters and nothing will change that, not the least the Pastor Victor Ajesafe (in photo) discordant outburst.

For non-Sierra Leoneans who may not have followed the story, here is a summary. The world renowned Islamic scholar and preacher, Mufti Menk, recently undertook a religious voyage to Sierra Leone and staged one of the most attended public lectures at the national stadium. A key message of the great Muslim man of God, Menk, was love for others. Menk has on countless times called on Muslims to love Jesus; his words, “you can’t be a Muslim if you don’t believe in Jesus”. The erudite Islamic intellectual, Menk, referred to Sierra Leone as ‘home of Islam’ because of the mammoth gathering at the stadium, where young and old, women and men hungry for the word of God climbed electric poles to hear the cultured Muslim professor. I believe that in that spectacular gathering, the first of its kind in Freetown, there were Christians who even if they have no believe in Islam would find it convenient to accompany their fellow Muslim friends and relatives. That’s the mortar with which the Sierra Leone community is built; one people regardless of religion.

Barely a minute after Menk jetted out of Freetown, another nationally known man of God of the Christian faith, Pastor Victor Ajesafe, turned the pulpit into a free-speech zone, turned against the manners of Jesus (Peace be on to him) and spat acrimonious messages to the peace-loving Christians who had gone to listen to the word of God. Message of deliverance became message of adherence. Ajesafe bad-mouthed Menk’s successful religious venture. He insulted the great Islamic missionary as a ‘false preacher, a liar’ (Astagfirullah for repeating this). The pastor slighted Islam as a terrorist faith and Muslims as perpetrators of terrorism. This is not new to the world but it certainly is an unwarranted and unwelcome statement in the hitherto religiously easy-going Sierra Leone. Ajesafe slurred Muslims who attended the public lecture as ‘idle and ignorant people’.

The pastor’s worry is this: ‘Islam can only spread where Christians don’t preach’- his words! Would you disagree if I interpret this as a shameless and bad reaction to the well-attended public lecture of Menk? Ajesafe conducts open preaching sessions almost annually, if not more, yet his ‘Let my Gate be Opened’ (as his events are dubbed) are incomparable crowd-wise to what Menk was able to pull. Aje’s gate is still half-closed. Instead of urging Christian leaders to call a press conference to pick a fight with Menk’s statements, which he turned upside down, it would have been very exciting that Aje invited Menk into a debate. Surely the Menk that I have followed so closely would have pulled Aje’s pants down metaphorically. It would have been an occasion for him to have distinguish between light and darkness.

‘Monkey nor d lef e black hand’- it seems there is so much truism in this popular local parable. Ajesafe tried legitimizing a very unpopular junta regime and failed. It was treason to all intent and purposes but the late President Kabbah, who Ajesafe wrongly stained as ‘doing black marketing’ for making Sierra Leone become a member of the Organization of Islamic State (which is untrue) showed compassion to him. Kabbah’s followers pardoned him. It is unsurprising therefore that this man would use the pulpit yet again to attempt to tear our religious forbearance to pieces.

Ajesafe is a case of lack of commonsense. Anyone who knows Sierra Leone will feel the palpability of the religious broad-mindedness in that country. He has lived there for many years and yet failed, or is it refused, to comprehend this. Would one with common sense be so insensitive?

How do you deal with someone who is suffers commonsense deficiency? You show them you are different- that you won’t step as low as they would. Some sensible things we should do, or not do, as Muslims to demonstrate to Aje that we are unlike him are as follows:

One; do not drag Nigeria into this. Being a Nigerian does not make Aje an ambassador of that country. He has no authority to speak on behalf of Nigeria and am sure he didn’t pretend to have voiced Nigerians’ feelings. ‘This is not Nigeria, he can’t bring his Nigerian tricks here’ are unfortunate statements that we should not be making. Historically, Sierra Leone is indebted to Nigeria for the peace we enjoy today in our country. The diplomatic relations between our two countries are palatable, the chemistry between many Sierra Leoneans and Nigerians is very fine. Aje’s uncommon outburst will not make me stop loving Kingsley Lington Ighobor, a Nigerian who is one of the godfathers of modern day journalism in Sierra Leone. And so we should not smear Nigerians for Aje’s bad manners.

Two; do not give credence to him by being violent. An audio that was being shared yesterday urged Muslims to go burn down Aje’s church to force the government to deport him. No! No! No! I hope that audio was not recorded by a Muslim. The speaker did not identify himself. As Muslims we are obliged to respect places of worship, and if you believe in Jesus, as a Muslim, you won’t think about desecrating a church. Doing that equals you to Aje. Don’t sink with him. The Churches, though led by him, are places our fellow Christian brothers and sisters are worshiping. As a true believer in Allah I challenge you not to share that audio calling for his churches to be burnt anymore. It’s un-Sierra Leonean. It’s Un-Islamic.

Three; do not turn your back on your Christian relatives and friends. Aje has not spoken on behalf of Christians. Our fellow Christians, like us Muslims, believe in the oneness of humanity. They won’t follow Aje’s words; therefore we should not use his wipe to beat them. In fact the Christian leadership in the country has disassociated itself from his arrant madness. Those Muslims who have Christians as wives (there are many in Sierra Leone) should give their wives the most passionate kiss ever this day and every day to reassure them of their union. Those Muslims who have Christians as friends should call them today and express love to them. Invite them for lunch, take dinner with them and go jogging with your Christian friends as you have always done. Do this and you would have slammed Aje’s Gate forever closed.

Four; do not wish Aje’s family bad. I would think asking for him to be deported would only bring stress to his family. He is married to a Sierra Leonean. Have you considered what it would mean for the lady who loves her country to be uprooted from her beloved home because of the ‘sins’ of the husband? I would leave Aje to see Islam continue to grow in Sierra Leone and Sierra Leoneans continue to live in an environment of religious inclusion.

Let us rather allow the law and law enforcers to handle the matter. The Press statement from the Minister of Social Welfare defined the audio and video clips as having the “potential to derail the longstanding religious tolerance credentials’ the country have enjoyed. Question is what does the law says about people who do or say what derails quietude and tranquility in the country? Let the guardians of law determine this and bring justice to all.

Is accepting evil worse than commi...