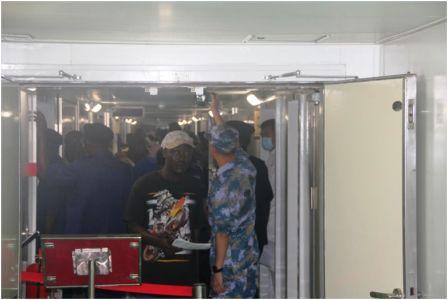 Over 4,000 Sierra Leoneans patients queued up at the Brima Atuga Stadium in the east-end of Freetown to receive a free medical service from the Chinese Military Hospital Ship. Over 1,500 people have already benefited from the free service since 19 September 2017.

Hassan Jones Kamara was the first patient to receive a cataract operation on his left eye on the Ark Peace hospital ship Queen Elizabeth ii port (water quay). He said it was a gracious moment for him to undergo the successful operation and that he feel better now. His wife who take care of him on board the ship expressed joy for the successful operation on the eye of her husband. She said her husband is a retiree and that her husband situation has been a burden, but now she was hopeful that Mr. Kamara would fully recover and see with both eyes again. “I love my husband and happy that he can see again, am also very happy for the Chinese for this free medical service. I pray that the friendship between China and Sierra Leone will last forever.” she said joyously.

Princess James is just 7 years old, but she has been suffering from aniea. She was transfer from the Jui hospital and has also got a successful operation on the Ark Peace. Her grandmother who looked after her said she was speedily recovering. Also, cancer tumor operation was also carried out on 15 years old girl who has been struggling with aliment. One of the Chinese doctor on board said they did not cut her breast but only removed the tumor and that they have confidence that she would recover from the cancer. The doctor noted that they were under extreme pressure to meet the needs of all patients, and advice that they would not be able to see all the patients in one day. Therefore he called on the patients to becoming in bits within the days that the ship was here.

On arrival at the port on the 19 September 2017, captain of the Ship, Rear Admiral Guan Bailin, noted this visit was a very important diplomatic mission to provide free medical services to Sierra Leoneans aimed at fostering peace and investment for a win-win cooperation between China and Sierra Leone. He thanked Strategic partners for all the preparations in order to facilitate the ship which its first visit to West Africa. Admiral Bailin explained that, the ship has tours 29 countries across the world and provided free medical services to over 100,000 people. The task force which has already visited Djibouti and Sierra Leone also plan to visit Gabon, the Republic of Congo, Angola, Mozambique, Tanzania and East Timor. The visiting crew would provide free medical services and other humanitarian assistance, as well as conduct exchanges and cooperation along with the armed forces of these countries to further consolidate and promote friendly relations and deepen professional exchange and pragmatic cooperation between Chinese and other navies.