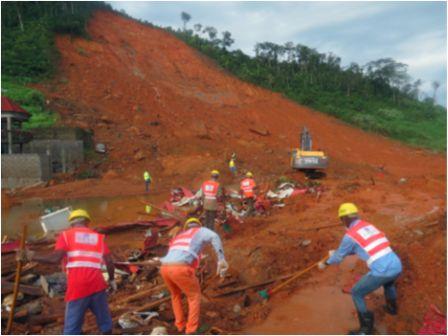 In what has been Sierra Leone’s worst natural catastrophe in living memory, over 500 people have died and about 3,000 rendered homeless by flooding this year. Inexplicable and unprecedented, the crisis has devastated the economy, ruined agriculture and created the need for the initiation of a major rebuilding programme.

It is believed that about 105 children are among more than 300 people who perished in the combination of mudslides and torrential flooding. With 600 people still missing in Freetown alone, President Ernest Bai Koroma described the humanitarian challenge ahead as overwhelming.

Sierra Leone needs to urgently get back to being productive, with agriculture in particular serving as a means through which economic activity can be revived. Already, this process has begun in areas not affected by the flooding, particularly with small-scale farming by women.

Already, the decline in mining revenue has forced a rethinking of Sierra Leonean’s economy, and the country’s leaders are slowly agreeing that agribusiness is the best strategy to beat the economic downtown. Nationally, the agribusiness sector accounts for between 60% and 70% of gross domestic product and around 60% of the population are involved in agri-business in one way or another.

Agriculture should be the mainstay of Sierra Leone’s economy, with the potential to sustainably employ about 75% of the population. However, the lack of a viable agricultural value chain and entrepreneurial activity has kept the sector at a largely subsistence level, and failed to address the problem of youth unemployment.

Sierra Leone has too few agro-allied companies that can turn basic crops into products. Infrastructure is poor. Worldwide, over 70% of agricultural workers are women and they also do most of rural marketing, making up more than two-thirds of the workforce in agricultural production. In Sierra Leone, women represent between 70% and 80% of the agricultural labour force. They play an increasingly important role in natural resource management and food production.

Agriculture can be an important engine of growth and poverty reduction. But the sector is underperforming in Sierra Leone; in part, because women who are often a crucial resource in agriculture and the rural economy through their roles as farmers, labourers and entrepreneurs almost everywhere, face more severe constraints than men in gaining access to productive resources.

Efforts by national governments and the international community to achieve their goals for agricultural development, economic growth and food security, will be strengthened and accelerated if they build on the contributions that women make, and take steps to alleviate these constraints.

Despite their critical role and contribution to agriculture, rural development and food security, women across Sierra Leone are discriminated against when it comes to access to ownership of and control over land, as well as the income produced from it. Supported by Oxfam in Sierra Leone’s Women’s Economic Empowerment Programme, the project primarily aims at improving incomes and diversifying livelihoods of women in the Koinadugu District.

Ambitious, the project is targeting 750 farm families in the district and is expected to increase production, processing and marketing of Irish potatoes by the women. Already, the group has learnt necessary production techniques for this crop and it is hoped that it will boost the local economy. PC Gbawuru III, the paramount chief of the Wara-Wara Yagala chiefdom, said: “The harvest was an important and remarkable milestone in the history of the Koinadugu district.”

Bridget Kamara the Koinadugu District agriculture officer, appreciated the women’s hard work and Oxfam’s support. She added: “We will discuss with the minister in charge of agriculture to support this initiative with the hope that more farmers will benefit from the Koinadugu experience”.

Like any other nation, Sierra Leone simply cannot rely on food aid and handouts to survive, so rebuilding agriculture and becoming self-sufficient in food production is paramount, if a way is to be found out of this crisis.

Several UN agencies have ramped up efforts in Freetown, including the World Food Programme’s (WFP) distribution of two-week rations of rice, pulses and cooking oil to 7,500 people.

Already, the first Israeli aid package has arrived. West African governments have provided more assistance, delivering cash and rice. However, this will only go so far and again, it is only a matter of time before this aid dries out.

As has been repeatedly said, Africa as a continent cannot and does not want to survive on handouts, as they do not offer long-term and sustainable solution to the plethora of socio-economic problems. Women farmers in the Koinadugu District are providing the only genuine way forward.