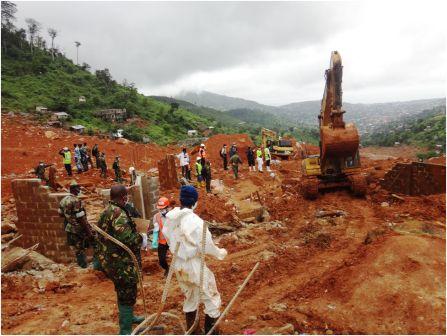 Point a finger at global warming for the mudslide in Freetown but it cannot be blamed for the catastrophic dimension of the storm. Blame climate change for the unprecedented opening up of the skies and floods across the Lion Mountains but it cannot be culpable for the crushing of some 400 plus souls including women and children. The epic guzzling of more than half a million people by heavy stones and mud (official statement says some 600 missing) cannot be attributed to nature exclusively.

The science that explains the correlation between climate and weather is explicit and incontrovertible. At the same time, the ways of mankind remain an unquestionable and potent stimulus to the devastations that befall humanity. The fact that the tornado manifested itself so obdurately in Freetown, stubbornly gobbling lives and property indicates that we have not been taking care of our environment.

Some African countries have learnt some lessons on making the environment friendly. Take a simple concern like plastic bags. Environmentalists believe that polythene takes thousands of years to decompose; if dumped in rivers, it can massacre marine resources, if discarded or thrown in drainages, and it can clog the sanitary runway thereby exacerbate flooding. Cameroon, Mali, Uganda, Mauritania, Guinea-Bissau, Malawi and Kenya are amongst countries that have given a red card to the use of plastic bags to upend the environmental disasters caused by its uncontrolled utilization. Walk around Freetown and be disturbed by the hubbub in every major junction as teens sell water tied in unhygienic plastic bags “cold water dae”. Not only are our teens being deprived of a sound future when they spend long hours street selling rather than schooling, we also dig our graves by littering the environment with plastic bags.

Consider a more serious issue- the lack of proper urban planning. Or is it neglect of residential settlements? The rest of mankind have decided to move towards a structured urban planning. An essential element of development programmes these days is the creation of inclusive cities with adequate infrastructure and services for all residents. Those who have visited Kigali, the city of Rwanda, say its topography is very much like Freetown with numerous high hills, ridges and valleys. The mountainous city of over 1.2 million people has over 732 km of good roads and reliable drainage systems and the city is dotted with green space and city parks. Huge structures are built in the mountains. In Freetown, even Victoria Park has been overtaken by funny structures for business purposes.

Try to ride on the cable car to the top of Table Mountain in Cape Town, South Africa at sunset and marvel at the sophistication of the city with many hills. Mount Entoto in Ethiopia is the highest peak overlooking the city of Addis Ababa (courtesy Wikipedia) where trees imported from Australia many years ago are still looked after.  In Freetown, we have transformed forests into deserts.

Not only are these African cities beautiful and economically viable, they understand the importance of infrastructure in development. And are taking care of the environment.

Conversely, Sierra Leone made a decision many years ago that it will be reckless about urban population boom; therefore we continue to reap the consequences of it. I can bet my life that Ernest’s successor, whether he or she is APC, SLPP, Any-PP or No-PP, will not reverse this self-destroying decision. Chop off my head if the “fitti-fatta” poor housing constructions on illegally acquired land, including so-called reserved areas, will stop in Freetown in the next two decades.

Sierra Leone is the country where settlements grow all by themselves with no regulatory bodies taking charge of their appropriate sectors. People build roads on hill-tops with mere hoes and pickaxes. It is never the business of the Roads Authority. And you wonder why there ae no good drainages? People who have acquired land are in a hurry to get things done on the land, even if it means put structures that don’t meet minimum engineering standards, otherwise someone else mostly the more powerful in society with an officially-issued title deeds on the same land will kick them out. The culture of issuing title deeds to two or more persons for the same land space in Sierra Leone is part of the problem. It accounts for the indiscriminate and mushroom erection of buildings that are a far cry from solid construction requirements.

Maybe we need some voodoo power or “sasa” to conjure the minds of our government authorities to an understanding that poor land use, inability to execute good land policies and inadequate housing planning are serious and potent flood contributors. Methinks, it’s a grand decision by the authorities to neglect the masses, a decision that’s wrapped in their desire to amass more wealth and retain control over all else. Wickedness “abia”!

I am thousands of miles away from my Swit Salone but am deeply disturbed by the era of unwelcome records my country is witnessing. The dreaded Ebola left hundreds of orphans whose future is graveyard bleak. The 2016 flood victims are still wreathing and struggling to put their feet to the ground. Needless to mention the scars of the civil war and its untold miseries. And the ugly spectacle of hundreds of houses being submerged and thousands of people being exposed to the calamities of the protesting environment is something we will continue to see. The question is how often and how severe it will be the next time it happens.

Fellow Sierra Leoneans, nature has spoken to us once again. Mudslide Mount Sugarloaf is a resounding message that we need to take care of our environment. It’s for the sake of our future. How many more lives should be ended prematurely before we listen?

It will be a political decision that determines how often we witness scenes as devastating as the infamous mid-August mudslide in Mount Sugarloaf. Urbanization can’t be halted. It is the serious environmental problems such as deforestation, erosion, poor drainage, pollution and global warming that can be halted. It is the indiscriminate erection of houses and growth of settlements, paying no attention to the impact on the environment that should be halted. And it can be done, if the authorities want it done.

That’s a decision to be made. A decision to be mindful of the things that account for the calamities that visit us often. They are not hard to find. The godfather of them is corruption. The godmother is unaccountability. Until these are chained and replaced with accountability, our proposal to wed development will remain an illusion. And so our future will remain muddy.