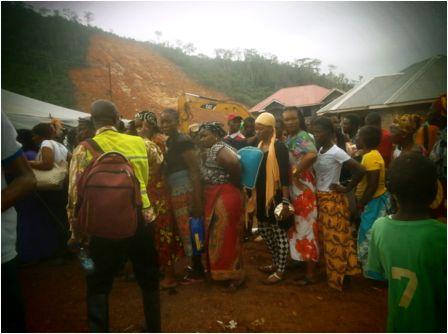 Mental Health Coalition and Social Work Sierra Leone have collaboratively rendered Pschyco-Social Support (SSS) support to some distressed flood victims who are currently traumatized as a result of the valuable human resource and properties they have lost through mudslide and flooding.  (Photo: Cross section of victims in the queue and SWSL members)

The Pschyco-Social Support teams paid what many people on the grounds at Regent Village where hundreds of men , women, youths and children massacred as timely visit for the fact that it has to do with rendering service to the depressed by giving them hope.

Giving a Pschyco-Social service to one of the affected victims, Mabinty Samura who have almost gone mad as she has lost her husband, children, mother and father and other relatives to the destructive mudslide, Hassan Koroma who is the Founder and National Director, Social Work Sierra Leone (SWSL) consoled her that nothing is lost because he said, what happened to her and other people is the will of God/Allah.

“We are here as Social Workers to help reduced stress and stabilize survivors including you”, Koroma told Mabinty Samura who was shedding tears with the statement that she was feeling like dying whenever she comes closer the place where her relatives died a natural death. He wiped of tears on her face and explained to her that the Government and international partners are working relentlessly to address their predicaments. “Mabinty Samura, I want you to believe that we are among the people in the corner who are thinking about your sufferings” he consoled her and connected her to the Minister of Lands, Diana Konomani who gave her an immediate attention. Speaking on the purpose of the visit, Director, Mental Health Coalition Sierra Leone (MHCSL), Edward Munda Jah said it is not only to console oppressed victims through Pschyco-Social service but also to talk with concerned authorities at the Regent Command Centre especially officials from the ministry of Social Welfare, Minster of Lands, Country Planning and the Environment, Dianna Konomani who was present, Office of the National Security (ONS) that is leading the national response activities and security forces to know where to go and what to do as said, they will be visiting various affected communities on daily basis.

He stated that they choose to offer Pschyco-Social Support because it is and ongoing process adding that the mental impact on victims is disturbing. He spoke on the important to give hope to those that survived the disaster through mental health point of view. He extends courage to survivors and encouraged them to put themselves together so that they can overcome their trauma.