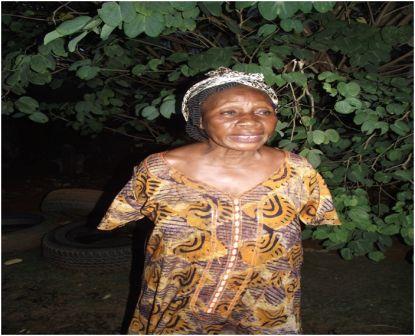 Information reaching this medium intimated that, one Hassan Kamara believed to be working at the Treasury Department together with some police officers including one Sergeant Mansaray attached at the Kissy Mess Mess Police Station have been harassing and molesting Madam Juliet D. Thomas (in photo), a former teacher who retired last March after 41 years of diligent service, for allegedly refusing to honor Le7 million bribery request made by the Treasury staff.

Speaking on behalf of her mother, Gloria Fofanah who has already tendered a complaint to the Human Rights Commission of Sierra Leone said her mother has taught for 41 years until she retired in 10th March 2017 adding that the benefit that was worked out and paid to her mother in the tune of Le52,430, 841.

Gloria Fofanah claimed that after a while her mother started receiving calls from Hassan Kamara, a staff at the Treasury that Madam Thomas was not the only one entitled to the money that was paid to her. She further alleged that since then, Hassan Kamara with some Police officers including Sergeant Mansaray attached at the Kissy Mess Mess Police Station in Freetown have been harassing her mother and have on countless occasions intimidated her to the extent that she was not only called a thief but molested, arrested and locked in Police cell at Kissy Police Station where the old woman was first arrested and detained before the matter was transferred to the CID last Tuesday.

It was like a holiday at the Criminal Investigation Department (CID) during sunset hour among children and sympathizers of the 65 years old Madam Juliet D. Thomas when the Head of Crime Management (CID), MB Kamara ordered her immediate release after unlawfully detaining her for hours.

The empathetic CID Boss said the old woman does not deserve to be detained in Police cell because she has rendered service to humanity as a teacher for 41 years.

MB Kamara who exhibited a humanitarian action authorized his subjects to take all necessary evidences with reputable sureties who should be residents of western area to grant the old woman bail.

It could be recalled that the two sureties were told to report at 10am every day until the matter was properly investigated and Hassan Kamara who is said to be inundated the old mother with phone calls by threatening her to give them at least Le7 million from the Le52M end of service benefit Madam Thomas received.

In that regard, Hassan Kamara was invited by CID to report around the same time stated above but to the surprise of Madam Thomas and her sureties, the Treasury worker at the Accountant General’s Department, Hassan Kamara did not surface or show up until authorities at the CID decided to discharge the disappointed retired teacher who have shaped minds of many young people in the country throughout her life time as teacher.

However, the two sureties, Sheikh Lombie and Gloria Fofanah expressed gratitude for the timely humanitarian intervention of the CID Boss, MB Kamara to release Madam Thomas who has been taken to hospital for medical attention as they are not comfortable with the health status of the retiree and further called on the Anti-Corruption Commission to intervene on this matter in order to bring the perpetrators to book.