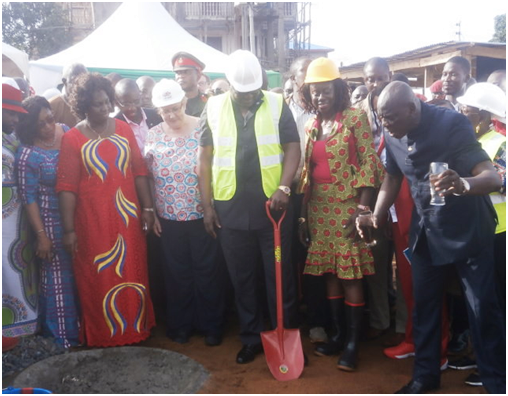 The President of the Republic of Sierra Leone, His Excellency President Dr. Ernest Bai Koroma has turned sod for the construction of 100 beds capacity hospital for each at Kingharman Road and Rokupa health centers respectively. (Photo: President Koroma performed turning of the sod and community members)

The ceremony which attracted the Freetown Mayor, Franklyn Baba Bode Gibson Cabinet Ministers, Councilors and the general public was held at the two hospital grounds on Thursday 27th July 2017.

Delivering the keynote address, President Koroma echoed that the occasion demonstrated Government’s commitment to continue delivering on its mandate adding that his Government lays premium on the health sector because he said pregnant women, lactating mothers and children under five are the most vulnerable class of people in society for the fact that they cannot afford to access the services.

“We have gone a long way with the Free Health Care (FHC) initiative” said President Koroma and disputed the fact that there are challenges with the implementation of FHC but he thanked God because he said, the initiative has saved many lives of the targeted beneficiaries.

He recalled that the Satellite Hospital at Kingharman Road was not only small but also not equipped to accommodate the increasing existing population in that vicinity. He maintained that as a Government, they will continue to refurbish more health centers and train nurses and doctors to deliver effective services in their various hospitals.

He disclosed that the hospital will be equipped with many facilities like operating theater, X-Ray machines and other devices to test pregnant women among others. He pointed out that the same construction exercise will be decentralized in eight districts nationwide. He cautioned community people at Brookfields and Rokupa to serve as watch dogs so that building materials will not be stolen away.

He said the construction work of the eight ultra-modern hospitals across the country is geared towards complementing Government’s commitment which is to create impact in the life of ordinary man.   He thanked donor partners especially DFID and UNFPA for their continuous support to the Government because they believe in his administration adding that any serious Government always attracts external boost or support. Donor partners at the proposed site at Kingharman Road

“I want this construction work to be completed within eighteen months” President Koroma urged contractors and he demonstrated Government willingness to continue doing the right thing to save precious lives of our people.

Representing Department for International Development (DFID), Sal Taylor emphasized on the way and manner the Ernest Bai Koroma led Government prioritizes quality health care delivery system adding that the Government stands to bring better health care for all Sierra Leoneans. She therefore thanked the Ministry of Health and Sanitation (MOHS) to reach at this peak and assured that the facility will reduce health problems among beneficiaries.

Speaking on behalf of UNFPA, Dr. King from Ghana said the event marked the beginning of the eight hospital construction project and noted that the facilities will provide services for men, women and children. He described the event as timely. He assured that UNFPA will continue working with MOHS to equip the facilities and train medical staff.

In her presentation, the Deputy Minister of Health and Sanitation One (1), Madina Rahman recalled that previously the President was at Waterloo, Lumley and Macauley Street for the same function. She said the President thought it wise to increase the capacities of hospitals to meet the high number of population and buttressed that the hospitals will have all facilities a modern health center should possessed. She encouraged community people to protect the legacies of President Koroma.

Hon. Alimamy G. Kargbo of Constituency 099 at Rokupa said a healthy nation is a wealthy nation and stressed that the community is in dire need of improved health facility. He said the youth in the area are jobless and he therefore appealed to MOHS and contractors to provide jobs for those who have skills in building construction and unskilled laborers.

In his brief statement, the Member of Parliament for Constituency 098, Hon. Kello registered his appreciation to donor partners for the confidence they bestowed in the Government of Sierra Leone and  appealed to his subject to monitor the process so that all of them will equally benefit without stealing any building material for the country’s health sector to continue growing.

He confessed that the Ebola Virus Disease (EVD) reversed the vast development that was created by President Koroma and he congratulated him in taking the lead in the fight against the epidemic.

“Because of the commitment of President Koroma, Shaw Sawyer said donor partners are still developing interest to continue funding his Government even at the last year of his tenure.

By The Health Newspaper Team