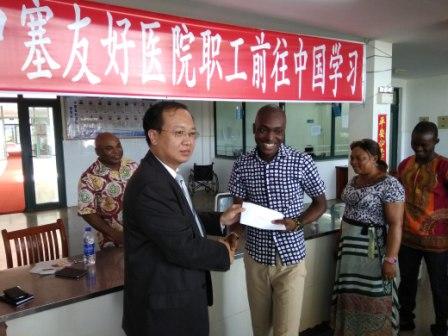 A farewell party was held at the Sierra Leone – China Friendship hospital at Jui on Friday 14 July 2017 for 5 nurses who will travel to China for further technical training on 18 July. The five nurses are Anthony Williams, Admire Sadie Mamedov, Regina Kumba Lansana, Munda Isaac Koroma and Mohamed Mansaray. Among the dignitaries present were The Economic and Commercial Counsellor of the Chinese Embassy in Freetown, Mr Shen Xiaokai; The Team Leader of the 19th Chinese Medical Team at Jui hospital, Dr. Liang Lihui; the Medical Superintendent of the Jui hospital, Dr. Kanu; and the Matron of the hospital, madam  Alice Stevens among others.

Dr Kanu said in his opening remarks that this was the first time that the hospital has received such offer to send their staffs to China for training; he thanked Counsellor Shen for his tremendous support to the institution and staffs of the Jui friendship Hospital. He further said that he can describe the relations between China and Sierra Leone as three wins for Sierra Leone. Firstly, China sends professional medical team to Sierra Leone, and the country invariably benefits from their technical skills and the service they render to citizens on a daily basis. Secondly, transfer of skills and knowledge from the Chinese to Sierra Leoneans, the five nurses are going to acquire knowledge and learn new skills that will enable then do their work more efficiently and effectively upon their return. Thirdly, the effort of the Chinese government will help to alleviate poverty, strengthen our health care system, and bring happiness to the lives of many Sierra Leoneans. During his key note address the Economic and Commercial Counsellor, Mr. Shen Xiaokai thanked Dr. Kanu, the Chinese Medical Team and the entire staff of the Jui Friendship Hospital for their hard work and dedication to serve the people of this country. He said the five nurses will be going to Hunan Province, home to the 19th Chinese Medical team. He admonished the nurses to take advantage of the opportunity and remain focus during their training in China. He said he sees the friendship between China and Sierra Leone as a win-win for all: what do we win, he asked? “We learn from you, your ability to work under very difficult conditions is something we admire, you are very resilient people”.

Dr. Liang Lihui, the team leader of the 19th Chinese Medical Team thanked the hospital management and staff for the warm welcome they received when they first arrived in Sierra Leone last month. He said that he is aware of the good work the 18th Chinese Medical Team did and promised to follow in their foot step.  He further stated that, they will work collaboratively with other local staff to diligently serve the people of this country.

Anthony Williams, one of the beneficiaries gave the vote of thanks on behalf of his colleagues. He expressed his gratitude to the counsellor for his generosity and assured him that they will work hard to gain the most from the Seminar.

No Ambulance Service in Sierra Leo...