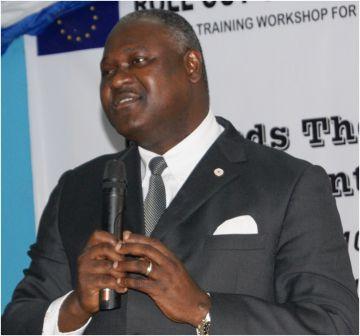 Mimicking former U.S. President, Barack Obama’s famous address to Africans during his visit to Ghana, Joseph Fitzgerald Kamara maintained that strong leaders are those with the vision, ability and conviction to inspire transformative development. Mr. Obama had famously noted that “Africa does not need strongmen but strong institutions”, but the Justice Minister expatiated on the notion by drawing a strong nexus between strong institutions and strong leadership.

“To me, strong institutions are produced by strong leadership. Strong leaders need not be dictators, abusers or violators of the fundamental rights of the citizenry, rather [they are persons] with the ability and conviction to inspire transformative development,” he told a three-day ‘National Stakeholders’ Conference on Justice and Human Rights’ in The Gambia, where he was keynote speaker, serving as special guest of the Gambian government. The confab ran from May 23-25.

Kamara opined that the path to sustainable peace, good governance and prosperity lies in institutional and governance reforms, referencing Sierra Leone’s transformative experience of establishing institutions that are today contributing to the promotion of accountability, human rights, and democratic good governance.

“During the early part of the end of the war, Sierra Leone took significant steps in not only establishing and supporting the operations of key rights and accountability institutions like the Human Rights Commission (HRC), National Commission for Democracy (NCD), Office of the Ombudsman, Political Parties Registration Commission (PPRC), National Elections Commission, Anti-Corruption Commission (ACC), and Audit Service, it also undertook massive reforms in the security and public sectors such as restructuring the military and the police,” he said.

He pointed out that the Government of Sierra Leone’s post-conflict reconstruction agendas focus on the empowerment of communities through expansion of justice services, deployment of magistrates and judges in all regions across the country. These developments, according to him, are helping to build strong civil society and governance institutions that are not only promoting democracy in the country but also holding the State accountable thereby inhibiting the tendencies towards dictatorship.

To the Gambian authorities, Kamara noted that there was no blueprint approach or silver bullet to managing transitions, as they cannot forge ahead as a nation and build a strong, cohesive society and good governance without addressing the scourges of the past. He however cautioned that in their bid to address the past and its historical legacies, they must not forget to invest in the infrastructure that should prevent that past from overwhelming them once again.

“We must engage in this conversation with a high sense of purpose and sincerity, openness and inclusiveness bearing in mind that a society governed by a public sense of justice is inherently stable, prosperous and healthy,” he beseeched.

The Attorney-General and Minister of Justice informed the Gambian people that Africa was on the rise again and that they cannot afford missing out on playing their part in the continental’s transformation. But as they join the transformation train, he prayed that their “fragile steps take you towards the direction of justice for all, respect for human rights and protection for the poor, women and children”.