Africa’s future rests on its youth 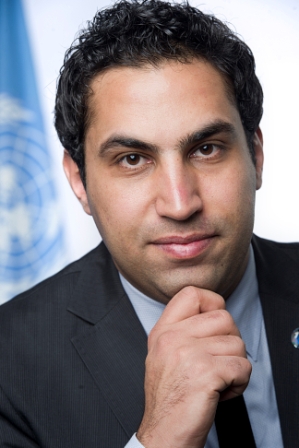 Africa’s future rests on its youth

Ahmad Alhendawi (in photo) served as the United Nations Secretary-General’s Envoy on Youth between 2013 and 2017. During that period, he traversed the world, visiting Africa 15 times, advocating for youth empowerment. Mr. Alhendawi left his UN job last February to take up a new assignment as the Secretary-General of the World’s Scout Movement. Before leaving New York, he sat for an interview with Africa Renewal’s Kingsley Ighobor to discuss his achievements and challenges at the UN, and also his deeply-felt hopes for Africa’s youth.

Africa Renewal: After four years as the UN youth envoy, how would you summarize your experience?

Mr. Alhendawi: It’s been a very unique experience. I joined the UN at the age of 27 as a senior advisor to the Secretary-General. The UN was already working on youth issues, but my appointment signaled that youth matters were being elevated at the UN secretariat. Whenever young entrepreneurs asked me what my job was, I told them that ‘I’m running a start-up’. It felt like a startup, because I started in a small cubicle: no staff, no budget and no mandate and we had to start from scratch. Luckily, the office has enjoyed a lot of support. We have seen the youth agenda gaining momentum and recognition. There has also been the incredibly rich experience of traveling around the world and meeting young people and engaging with Member States.

Were you initially overwhelmed?

I was totally overwhelmed when I first arrived. I knew it was going to be a daunting task, but I didn’t fully appreciate the complexity. You do more when you are not intimidated by structure.

What do you mean by being ‘intimidated by structure’?

I mean that a lot of talented people that work in big organizations are defeated by structures, defeated by bureaucracy; the fact that a bunch of people are telling you: ‘No, this doesn’t work, that’s not going to work.’

Were you defeated by the UN structure?

When I joined the UN, I was a big believer in the institution; I’m even a bigger believer now. But bureaucracies are not easy to work with. There are lots of complex issues that you have to consider. Sometimes this drove me bananas. However, most of the time, I was able to reach out, build a good coalition, make friends and achieve something.

What are the two or three of your most important achievements?

I would say that never before have youth issues been recognized as much as they are now, judging by the ECOSOC [UN Economic and Social Council] Youth Forum held in January. For the first time, the UN held a forum that brought together youth ministers from Member States.  We had 129 ministers attending the Youth Forum. This is an achievement because the UN is meant to offer that space to facilitate dialogue and offer a platform to convene, set norms and encourage each other to do more.

Another achievement is that in the Sustainable Development Goals, there are up to 60 indicators (out of the total 230) that pertain to youth development. This is because the process leading to the SDGs had huge input from young people. We didn’t have that for the Millennium Development Goals.

We also have the Security Council Resolution 2250 on youth, peace and security. The Human Rights Council adopted for the first time in its history a resolution on youth and human rights. In Addis Ababa [Ethiopia], the first outcome for the Financing for Development Conference focuses on youth policies and youth development. The Peacebuilding Commission for the first time set up a peacebuilding fund on youth and peace building. And the list goes on. I mean, every aspect of operations at the UN is now paying attention to youth issues.

What impact do these resolutions or frameworks have on youth in local communities?

At the end of the day, you can’t solve a problem without talking about it. But you also can’t solve it by just talking about it. My job was to make sure these issues are talked about in a meaningful way. Now, if you ask me if the situation for youth improved in the countries, I don’t think there is a huge improvement yet, and that’s why we still need to do more.

About 60% of Africa’s unemployed are young people. What are the consequences of such a high youth unemployment figure?

It wastes the potential of Africa and its youth. If countries fail their youth, they end up becoming failed states. Africa has the largest percentage of young people. People talk about a demographic dividend for Africa. What we have now in Africa is not the ‘dividend’ it is just a youth population bulge.

Why not a dividend?

The dividend is the result of your investments. If you invest well, you get results—you get a peace dividend and a development dividend. But that doesn’t happen by itself.

You mean the lack of investments in the youth will put at risk the prospects for peace or development ?

Yes. Historically, there is a correlation between a rise in the numbers of young people and transitions. The Asian tigers: when they had too many young people, they had an economic transition.  Eastern Europe and the Arab Spring: they had political transitions. I think it’s up to Africa and its leaders to decide what will be the transition.

Within the youth advocacy world, is there a growing focus on prospects for women and girls in development?

Absolutely! In North Africa, for example, the unemployment rate among young women and girls is double that of young men. In Uganda, you have a high teenage pregnancy rate. The point is simple; you cannot have many young women and girls holding jobs and pursuing careers if they are being victims of early marriage, teenage pregnancy or high maternal mortality. Ensuring that girls are in school and can enjoy their childhood is crucial for development. I think it is almost a game-over for a young girl who is married or pregnant at 13. It means she will drop out of school and could get caught up in a vicious circle of poverty and illiteracy.

Some African societies tolerate child marriage and teenage pregnancy. How can we break through such cultural barriers?

We need local, religious and community leaders, and politicians to speak the truth—that allowing girls to finish their schooling and make informed choices for their lives is essential.

There’s no one profile for a failed youth policy, but there are commonalities that include, basically, a lack of serious political will, a lack of funding, and no real engagement with young people. We also have weak structures: the legal frameworks, the taxation, the access to credit, among others.

Can innovation and technology be a game changer for young people?

Sure. There’s massive potential in information technology. But you need more skilled labour, you need more qualified young people, and you need to invest more in the youth. We are seeing some of the amazing start-ups coming from Africa, more faces that are shaping the way we work.

How does your new role with the Scout Movement align with what you did here at the UN?

I will be heading an organization of 40 million members. Actually, I went to meet the Secretary-General to inform him that I would be taking this [Scout Movement] job. He told me that this is a very good deal for the United Nations. He said ‘We lose one, we gain 40 million.’  I thought that was true. We have to get down to business; we can’t just keep on talking about the SDGs.

How do you see the future of young people in Africa in particular?

I have no doubt it is going to be bright, because the energy I’ve seen there, the talents I saw in Africa, are unparalleled.